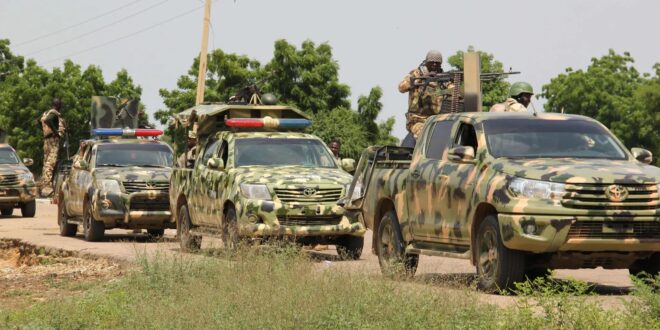 A top military commander said that Abu Musab al-Barnawi, a kingpin of an extremist organization known as the Islamic State West Africa Province, had died.

A leading figure in a terrorist group that has declared an affiliation with the Islamic State and destabilized a vast region in West-Central Africa has died, according to Nigeria’s top military commander, but the threat from violent extremists in the area is far from over.

The militant, Abu Musab al-Barnawi, was a key figure in a group known as the Islamic State West Africa Province, or ISWAP. Gen. Lucky Irabor, Nigeria’s military commander. said on Thursday that he could “authoritatively confirm” the death of Mr. Barnawi, but did not provide any further details.

ISWAP splintered off from the better known group Boko Haram in 2016, and for years both outfits have terrorized people across Nigeria and the neighboring countries of Chad, Cameroon and Niger, leaving tens of thousands dead and millions homeless.

ISWAP has focused its attacks on the military — in contrast to Boko Haram, which is thought to be responsible for the vast majority of deaths of civilians, according to analysts and military officials in the region. ISWAP is now thought to be as powerful — if not more so — than Boko Haram.

Mr. Barnawi, whose age was unknown, was the son of Mohammed Yusuf, Boko Haram’s founder.

The longtime leader of Boko Haram, Abubakar Shekau, was also reported to have died this year, killing himself before he could be taken prisoner by Mr. Barnawi’s group.

Since then, fighters of Boko Haram and their families have left the group by the thousands, and defected to the government. But those familiar with the militant groups caution that there are new leaders ready to replace the kingpins who are killed.

“The death of Shekau and Abu Musab al-Barnawi will not be the end of insurgency in the Northeast,” said Ibrahim Awami, who said he had been abducted and forced to join ISWAP in 2016, but escaped less than a month ago. “There are many Shekaus and al-Barnawis still in the bushes.”

Mr. Awami, 32, said that Mr. al-Barnawi had been shot in the leg earlier this year in a fight with the Buduma, an indigenous group in the Lake Chad region.

“Every day, there is a fight against one another in the ISWAP camp and mutual suspicion between the leaders has been on the increase. Hardly a new leader stays for a month or two without having to be killed or removed,” he said.

Mr. Barnawi’s death could not be independently confirmed, and to many Nigerians, the military chief’s statement is not conclusive evidence of it. The nation’s military had previously claimed to have killed the Boko Haram leader, Mr. Shekau, only to have him later turn up alive, sometimes gloating in videos.

In his news conference, General Irabor said of Mr. Barnawi, “He is dead and remains dead.”

The U.S. State Department and the U.S. Africa Command said they were aware of the reports of the death of Mr. Barnawi, but could not confirm them.

Mr. Barnawi’s demise, if true, would be a blow to his group’s fortunes in the region. But it may not affect the leadership structure. It has long been unclear who really runs his extremist force.

The real power was long thought to be Mamman Nur, once a top leader in the original Boko Haram group. In northeastern Nigeria, ISWAP is still often referred to as ‘‘the Mamman Nur faction’’ — meaning a faction of Boko Haram, as opposed to the group led by Mr. Shekau.

Mamman Nur, however, is thought to have died in 2018, and security experts in the region say it is difficult to know exactly who is at the group’s helm now.

Still, Colin P. Clarke, a counterterrorism analyst at the Soufan Group, a security consulting firm based in New York, said, “Without risking overstating the significance, the death of al-Barnawi is extremely important” because ISWAP has greatly expanded its territory in recent years.

He added, “With the recent death of Shekau, jihadism in West Africa is undergoing a transition, as groups vie for resources and recruits.”

Post Views: 82
Previous Tensions in Lebanon Boil Over in the Streets of Beirut
Next Iran warns Israel over rising threats to nuclear program