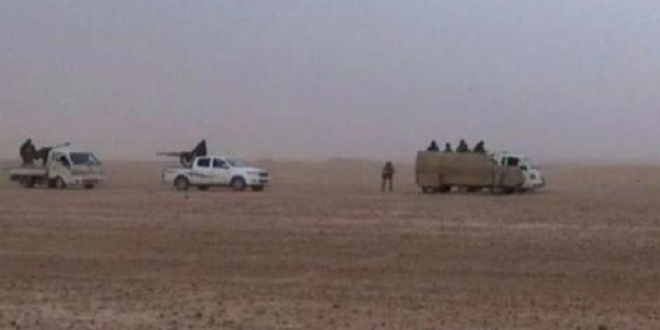 Violent explosions rocked the areas under the control of the Syrian regime in the western countryside of Deir Ezzor, yesterday morning (Sunday), caused by intense air strikes, carried out by Russian warplanes on areas in the desert of the region, in an attempt to target ISIS, which is hiding in the caves and caves of the Badia. From him, hours after an ambush carried out by the organization, which caused heavy casualties among the militias loyal to the regime.

Thirteen members of the “Aswad al-Sharqiya al-Shaitat” loyal to the regime were killed, in addition to the wounding of others, on Saturday, in an “ambush” carried out by the organization in eastern Syria, in the Al-Masrib desert in the countryside of Deir ez-Zor. According to activists; The sounds of shooting were heard in the city of Deir ez-Zor after the bodies of the dead arrived in the city. The director of the Syrian Observatory for Human Rights said that “the death toll is the highest among the regime forces and their loyalists for about 5 months,” at the hands of the organization’s fighters, whose activity “has increased recently in the areas controlled by the regime forces and (Syrian Democratic Forces) in East of the country.

With the increase in the organization’s attacks on the regime forces, the desert turned into a scene of clashes, sometimes punctuated by Russian raids in support of the regime’s forces, targeting the locations and movements of the organization’s fighters. Since the announcement of its elimination in March 2019 and the loss of all areas of its control, the organization has retreated to the Syrian Badia, which extends between the governorates of Homs (central) and Deir ez-Zor (east), at the border with Iraq, where its fighters are holed up in mountainous areas.

Since March 24, 2019, the Observatory has documented the killing of 1,593 members of the regime forces and militiamen loyal to them, in addition to 153 non-Syrian fighters loyal to Iran, during attacks, bombings and ambushes carried out by the organization. In addition, 1,081 members of the organization were killed during the same period in attacks, shelling and targeting.

This is the biggest human losses for the regime forces and the militiamen loyal to them at the hands of the organization since last June, according to the “observatory”, which documented, on June 5, the killing of 23 members of the regime forces in separate areas of the Syrian Badia, in ambushes and mines. The organization spread in the eastern desert of Homs, passing through the desert of Hama and Deir ez-Zor, all the way to the desert of Raqqa.

Among the 23 killed, an officer in the Iranian Revolutionary Guards and his escort, of Iranian nationality, were targeted with machine guns by the organization’s elements while they were passing on the Palmyra-Deir ez-Zor road in central Syria.

Post Views: 161
Previous Syria will attend the next Arab summit in Algeria, Syrian politician predicts
Next Biden and Xi ‘meet’ and agree: US-China competition, not conflict