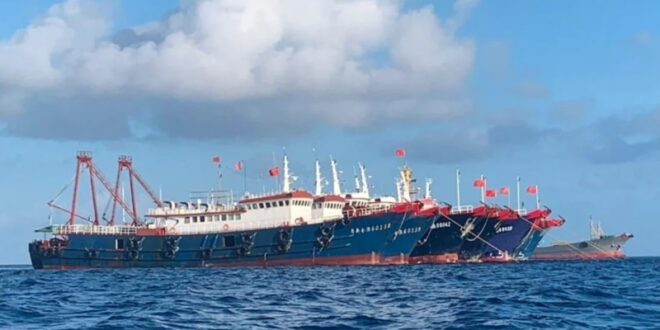 Hundreds of Chinese maritime militia ships are operating in contested areas of the South China Sea on a consistent basis, according to a new U.S. think tank report that says this poses a significant challenge to “maritime order rooted in international law.”

The Washington-based Center for Strategic and International Studies (CSIS), says that for years China has been funding expansion of the militia to assert its claims in the South China Sea.

In its report published Friday, Pulling Back the Curtain on China’s Maritime Militia, CSIS provides a profile of a force that it says has been operating alongside Chinese law enforcement and military to achieve Chinese political objectives in disputed waters.

This is known as “gray-zone tactics”’ when unconventional forces and methods are used to pursue strategic interests while trying to avoid the possibility of a conflict.

The report said the creation in recent years of Chinese outposts with large port facilities led to a sharp increase in the number of maritime militia ships sailing to the disputed Spratly Islands.

“The big picture is that there have been about 300 maritime militia vessels deployed in large groups around the Spratly islands since August 2018, relying on China’s artificial islands for logistics support but no longer cloistering themselves within those harbors,” the report alleges.

The report said militia ships are funded by the Chinese government through subsidies “that incentivize local actors to construct vessels in accordance with military specifications and to operate them.”

The authors conclude that “the majority of Chinese fishing vessels in disputed areas of the South China Sea do not operate as independent commercial actors but instead as paid agents of the Chinese government obligated to help fulfill its political and national security objectives.”

Additionally, the report provides a list of 112 Chinese militia ships allegedly active in the South China Sea, and 52 more ships “likely to be militia.”

The Chinese government has yet to respond to the report, but a leading Chinese scholar in maritime studies has rejected most of the findings, citing “some logical and methodological problems.”

‘Paid agents’ of the Chinese government

CSIS researchers have been looking into publicly available Chinese media, official documents and statements to find a “wide array of central and local government programs implemented in recent years to finance the maritime militia.”

“Existing subsidy policies incentivize the operation of large vessels in disputed waters while providing no incentive to fish,” the report alleges, giving the example of special fuel subsidies to vessels above 55 meters in length “allowing owners to easily profit by deploying to disputed waters without fishing at all.”

The report said since completing the construction of its artificial island outposts in the Spratly islands in 2016, China has shifted its focus toward asserting control over peacetime activities across the South China Sea and the maritime militia is a key component of this shift.

Since then, militia boats have been deployed regularly and in great numbers to disputed waters in the Spratlys. A recent large-scale deployment was in March this year, when around 200 of suspected militia boats gathered near the Whitsun Reef in Union Banks, leading to a major diplomatic rift between China and the Philippines.

China’s modern use of fishing militias dates back to at least 1974, when some militia boats were used to take over the Paracel islands from South Vietnamese troops, according to the report.

Maritime militia also played “a key role in China’s seizure of Scarborough Shoal in 2012, as well as the deployment of a Chinese oil rig into Vietnamese waters in 2014,” the report said. Scarborough Shoal was effectively wrested from the control of the Philippines.

The numbers and rapid deployment of militia ships has “radically changed the peacetime balance of forces in the South China Sea,” the report concludes.

The report’s findings were challenged by Hu Bo, director of the Center for Maritime Strategy Studies at Peking University and one of China’s leading scholars on the South China Sea. He said “a precise definition is highly needed for maritime militia.”

“Otherwise, all fishermen can be considered as maritime militias if observed with colored glasses,” Hu wrote on Twitter.

He argued that government subsidies to the fishing industry are common in the world and “should not be taken as evidence of maritime militias.”

The Chinese analysts said that while “the militia has long been a traditional part of China’s national defense” its role is on the decline, therefore drumming up the maritime militia’s power “is the most ridiculous ‘China threat’ theory.”

Greg Poling, director of the CSIS Asia Maritime Transparency Initiative and one of the authors of the report, rejected Hu’s criticism.

“We don’t guess at which fishermen are militia, we only identify those that the Chinese government labels as part of the militia or which were engaged in known militia deployments,” Poling told BenarNews.

As for the “declining role” of the maritime militia, Poling said that “the evidence is quite the opposite.”

“As we document in the report, there has been a boom in the size, funding and capabilities of the militia since 2013 when (President) Xi Jinping directed that the militia be expanded,” he said.