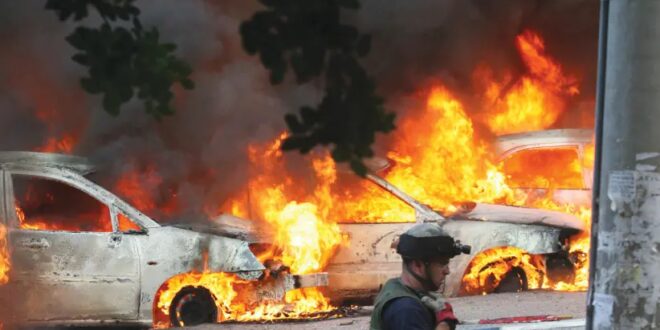 Israel should not attack nuclear Iran alone, but should join a NATO 2.0 – opinion

An emboldened nuclear Iran would increase its involvement in terrorism and subversive activity across the globe.

In July 2009, six months after president Barack Obama was elected, I was invited to the White House by a senior US official.

He asked for my opinion regarding the possibility of an Israeli airstrike on Iran. The specific question was how Israel should respond in the event it was provided a “yellow light” to bomb Iran’s nuclear facilities.

After making clear that I neither represent nor could speak on behalf of the Israeli government, I shared my view with my host. “Even if the US gave Israel a green light to attack Iranian nuclear facilities,” I said, “it should refrain from doing so.”

My host was taken aback by my response. I elaborated on the complexities of an aerial strike on Iranian nuclear facilities, which would require a simultaneous attack on multiple underground fortified targets. While an Israeli airstrike may damage these facilities, perhaps even significantly, it would still be unlikely to eliminate Iran’s nuclear capabilities. Moreover, I argued, immediately following an Israeli attack Iran would accelerate its race to acquire the bomb, claiming it to be essential given that it was under Israeli attack.

On top of this, within a few hours of an Israeli strike, Iran would order Hezbollah, its proxy in Lebanon, to activate its multibillion dollar arsenal of what today consists of more than 150,000 Iranian rockets deployed in Lebanon for exactly this purpose. Hezbollah would launch thousands of rockets every day toward the Israeli civilian home front. This so-called “conventional” response would have the potential to cause strategic damage in Israel and inflict an unprecedented number of casualties.

Finally, I reminded my host that an Israeli strike leading Iran to become even more determined to acquire a nuclear bomb would carry with it the potential to destabilize the region and the entire world. Iranian nuclear capability poses an existential threat to Israel, but also threatens its neighboring countries – the Gulf States, Iraq, Saudi Arabia, and indeed the entire Middle East and beyond. An emboldened nuclear Iran would increase its involvement in terrorism and subversive activity across the globe.

This conversation took place 12 years ago, but unfortunately it holds even truer today.

For all these reasons, I said, I did not believe that Israel alone should take on the burden, on behalf of the whole world, of preventing Iran from developing military nuclear capabilities. I emphasized that any aerial attack, rather than being a solo Israeli operation, should be conducted by a US-led international coalition, which Israel would be likely to join.
WHAT WOULD this international coalition ideally look like?

It is my view that regardless of whether a new nuclear deal with Iran is signed in Vienna, the United States should immediately take it upon itself to form a military alliance – a NATO 2.0, if you will – in order to deter Iran from attaining military nuclear capability, and certainly from using nuclear bombs against any other state in the future.

This second NATO should be a broad alliance encompassing the moderate Sunni Arab countries – including the Gulf States, Jordan, Egypt and Saudi Arabia – as well as Israel, the US, European countries and possibly Australia and others.
This alliance would provide a nuclear umbrella to Iran’s neighbors, thereby averting nuclear proliferation in the Middle East. NATO 2.0 would maintain a joint, independent intelligence body to monitor Iran’s activities, be they nuclear or conventional military buildup, political subversion, support for terrorism, and so on. If so required, the alliance would act against Iran.

The formation of NATO 2.0 does not require Iranian consent. It would be unconnected to any new nuclear agreement, should one be signed. (In fact, it may even intensify Iran’s interest in reaching a new agreement.) NATO 2.0 would not contradict a new nuclear deal, since as long as Iran upholds its commitments under the agreement and does not put its neighbors at risk, then no conflict should arise between Iran and the alliance.

It is crucial for the Biden administration to recognize that without a component like NATO 2.0, the chances are high that any new agreement with Iran will be problematic and have dangerous implications for the Middle East and the rest of the world; it will also prove difficult for the US to enforce.

However, the formation of NATO 2.0 in and of itself will not suffice in deterring Iran from acquiring military nuclear capabilities, or even from attacking its neighbors with a nuclear bomb once it has one. A new military doctrine must be adopted vis-à-vis Iran.

During the Cold War, the MAD (mutual assured destruction) doctrine deterred both the US and the USSR from deploying their nuclear arsenal against each other. The knowledge that, should one superpower succeed in surprising the other with a swift nuclear attack, the other side had a second-strike capability that would destroy the attacker, served as an effective disincentive for starting a nuclear war.

But mutual assured destruction may not be enough to deter the messianic, fundamentalist Islamic Republic of Iran from using nuclear weapons. NATO 2.0 should therefore adopt a new military doctrine; instead of MAD, this international alliance should establish an “AID” doctrine – assured Iranian destruction. The ayatollahs should know that they are being monitored by a determined, strong and capable international nuclear alliance which is locked and loaded and just waiting for them to make a strategic mistake.

In the absence of the creation of NATO 2.0, the entire burden of deterring Iran will be on the shoulders of the United States, and with what the Iranians perceive as ongoing American weakness, isolationism and hesitation, the potency of this deterrence is questionable.

Without a concrete and credible “stick,” Iran has no reason to agree to any American condition in the Vienna nuclear talks; even if the Iranian leaders do ultimately sign a new deal, they will most probably not hesitate to deceive the world and ignore their commitments.

Therefore, NATO 2.0 is a critical factor in reaching an effective new nuclear deal with Iran, in securing this deal, and in deterring Iran from violating it. Should a new deal fail to be reached, NATO 2.0 will still deter Iran from crossing the nuclear military threshold and from attacking any of its neighbors with a nuclear bomb.

Post Views: 89
Previous UAE: ‘Attack will not go unpunished,’ 3 killed in Abu Dhabi drone attack
Next US denies Syria-Lebanon-Israel gas deal; was it ever going to happen?