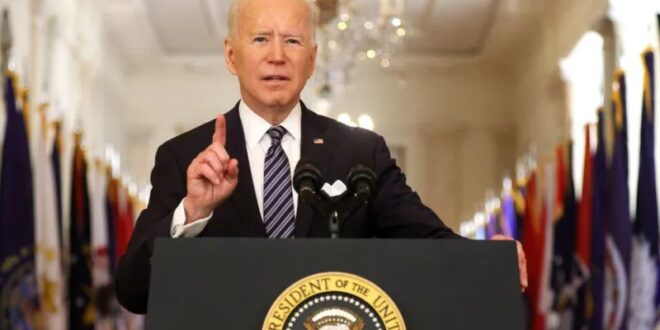 If President Biden Believes Putin Has Decided To Invade Ukraine, Why Wait To Impose Sanctions?

President Biden claimed at a brief press conference yesterday that Russian President Vladimir Putin has already decided to invade Ukraine in the coming days. He reportedly received information that Russia has Ukraine completely surrounded and that the Kremlin would be targetting Kyiv. This is a sudden turn-around for Biden, who had just stated 72 hours ago that no final decision from Putin had been made to invade Ukraine. This follows an earlier prediction made by the White House that Russia would invade Ukraine on February 16th.

This report comes after Biden and Putin had incremental success with diplomatic talks, with the Kremlin saying they had begun withdrawing troops from the Ukrainian border following the completion of military exercises with Belarus with Biden re-committing to diplomacy in addressing security concerns.

“We have reason to believe that Russian forces are planning and intend to attack Ukraine in the coming week, in the coming days,” said Biden in the White House.

This report by Biden is one of many reports that claim a Russian invasion is imminent, with the most recent one being a February 16 invasion that prompted Ukrainian President Volodymyr Zelensky to announce a national day of unity. When the imminent(which means at any moment) invasion did not happen, the United States was trolled by various Russian government officials and official government accounts stating that Biden and the West had been the source of extreme disinformation.

“Make no mistake, if Russia pursues its plans, it will be responsible for a catastrophic and needless war of choice. The US and our allies are prepared to defend every inch of NATO territory from any threat to our collective security, as well,” Biden expressed. “Over the last few days, we’ve seen reports of a major uptick in violations of the ceasefire by Russian-backed fighters attempting to provoke Ukraine in the Donbas,” the President continued.

Pentagon intelligence reports also claim that the Russian military has moved forces toward the border within the last 8 hours despite the Kremlin reporting that it had been withdrawing troops from the border a few days ago. Russian forces have been said to be in an attack position, with those ready to attack within 40% to 50%.

SOFREP continues to monitor the situation at the border, being one of few media outlets that stated an invasion was unlikely to happen due to the harsh winter weather, the absence of field hospitals, fuel, and ammunition dumps, as well as a lack of ultimatums from both sides. However, new reports with the BBC determined that there were large-scale updates to Russian forces on the border, with a single field hospital now in place in Belarus. This is not conclusive proof of an imminent invasion since this area of Belarus has been a training area for joint exercises with Belarus for decades. For an invasion involving 150,000 troops, you would expect to see a dozen field hospitals located at various points near the front with dozens of military ambulances parked and waiting. Generally, you don’t locate field hospitals in the middle of large military encampments since they are not military targets under the rules of war. Locating one inside a military encampment, however, exposes it to attack because the military camp itself is a legitimate target. This is something you would do in a training exercise, however.

The U.S. has vast photo intelligence capabilities that have not been on display, the administration could produce compelling evidence of large fuel and ammunition dumps, field hospitals, and armored units lined up on the roads leading into Ukraine and staged for an immediate invasion but has failed to produce them so far.

On February 12th reporters pressed White House National Security Advisor Jake Sullivan to produce some evidence that an invasion was imminent, Sullivan said the best the government could do is point them to the evidence of the build-up on social media platforms, but declined to provide any proof obtained by the government saying, “but it’s not my job to convince any of you of anything…”

Reports of false-flag attack plans had also surfaced throughout the recent months as a pretext to invade Ukraine. Just a few days ago, a kindergarten in the Stanytsia-Luhanska village was shelled by Russian-backed separatists with 24 children inside. The attack was said to be the 39th artillery attack along the frontlines, according to Ukrainian Commander of the Ukrainian Military in Donbas Lieutenant-General Alexander Pavliuk. Reports of Russian special forces planting explosives in Donetsk also surfaced, which many led to believe was an attempt for a false-flag attack.

As a response to the growing tensions, NATO Secretary-General Jens Stoltenberg on February 16 reported that NATO members are considering forming battle-ready units along the eastern front as a response to Russian aggression in the region, which reportedly currently has about 100,000 to as much as 150,000 troops stationed along its various borders with Ukraine. These new combat units could be reportedly stationed in Romania, Bulgaria, Hungary, and Slovakia signaling one of the biggest military shifts since the Russian annexation of Crimea from Ukraine in 2014.

This comes after NATO has said in the past that it would not send troops to Ukraine as it was not a member of the NATO alliance. So far, the NATO response to an invasion said to be imminent for several weeks has been very limited in scope and scale, with token deployments of ships planes, and troops to member countries.

Stoltenberg does not believe that Russian forces would be completely withdrawn, stating that evidence from satellite images did not reflect a large enough withdrawal and that more troops were allegedly pilling up on the border.

“So far, we do not see any sign of de-escalation on the ground. No withdrawals of troops or equipment on the ground. This, of course, may change, however, what we see today is that Russia maintains a massive invasion force ready to attack with high-end capabilities from Crimea to Belarus. This is the biggest concentration of forces in Europe since the Cold War,” said the NATO chief. He also claimed that if Russia uses force, it will come with a high price.

On the other hand, Russia again has vehemently denied these accusations, with Russian Foreign Ministry Spokeswoman Maria Zakharova saying that the US should stop contributing to the mass hysteria surrounding the crisis.

“We urge the Western countries to stop whipping up anti-Russian hysteria, which is actually already anti-Ukrainian as well, we urge them to stop pumping Kiev[sic] with weapons. These actions negatively affect both the settlement of the conflict in Donbass[sic] and the general situation on the track of security and stability in Europe,” said Zakharova in a report by TASS.

On the eve of this invasion Ukrainian President Volodymyr Zelensky has gone to Germany for the Munich Security Conference where he is expected to meet with Vice President Harris. President Zelensky’s wife and family remain in Kviv.

The President has promised that if Russia does invade Ukraine that the United States, acting in concert with NATO countries will impose crippling sanctions on Russia. This begs the question that if President Biden truly believes that an invasion by Russia is a forgone conclusion why wait to impose the sanctions? If the threat of sanctions has not deterred Putin from deciding to invade Ukraine, the threat has failed and the only option left is to carry through and impose the sanctions immediately.

If the invasion is to occur in days, you would expect that the United States and other NATO countries would now be eager to ship large amounts of weapons to Ukraine, and this has not occurred despite urgent pleas from President Zelinsky that Ukraine cannot be defended without more weapons from the West.

We would also expect to see NATO go over to an Amber Alert posture as well, this has not occurred either.

Ukraine has not called up its 900,000 reservists or made any apparent moves to strengthen its defenses near the border, for a country facing an invasion in the next few days, this would be incredibly stupid.

President Biden has stated repeatedly that the United States and NATO countries support Ukraine’s independence and territorial integrity. These statements are being made even as the U.S. withdrew 160 members of the Florida National Guard’s 53rd Infantry Brigade Combat Team that were training Ukrainian troops, which flies in the face of White House claims of support. They could have just as easily been moved to a location near the Polish border for quick evacuation if a war did break out, but still train Ukrainian troops.

If the sovereignty of Ukraine is of such vital interest to the U.S. and NATO countries that it is willing to impose crippling sanctions on Russia which will impact the entire economy of Europe, then why won’t NATO admit Ukraine as a member? Unless it fears the reaction of Russia? If the U.S. and NATO will not risk Russia’s wrath for admitting a democratic country to NATO, it certainly will not put anything on the line if Putin were to invade the country and attempt to annex it outright or install a puppet regime aligned with Russia.