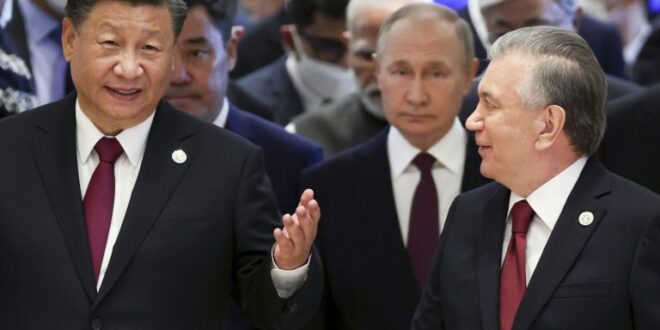 One month ahead of the 20th Party Congress, where President Xi is expected to further consolidate power, the trip provided an opportunity for Xi to portray himself as a leader with strong foreign policy credentials in the midst of domestic economic uncertainty and wider global unrest.

President Xi’s Central Asia trip offered further confirmation that China has replaced Russia as the major power broker in the region; dialogue between Xi and Putin revealed tensions over Russia’s war in Ukraine.

On September 14, Chinese President and Communist Party Chairman Xi Jinping embarked on his first foreign tour since the Covid-19 outbreak in January of 2020. President Xi’s first stop was Kazakhstan, where he held a bilateral meeting with President Kassym-Jomart Tokayev. President Xi then continued on to Uzbekistan, where he attended the Shanghai Cooperation Organization (SCO) summit on September 15 and 16, participating in meetings with heads of states—including Russian President Vladimir Putin. While much focus has been placed on the Xi-Putin meeting, the Central Asia trip has broader and more important implications for the shifting power dynamics in Eurasia. For President Xi, the timing and location of his first foreign trip have important domestic implications. Meanwhile, the SCO summit—and especially the announcements following side-meetings—signal that China, not Russia, is the primary powerbroker in the region.

Taking place one month ahead of the 20th Party Congress, where President Xi is expected to further consolidate political power, the trip has provided opportunities to depict himself as a leader with strong foreign policy credentials and strategic partnerships in the midst of domestic economic uncertainty and global turmoil. The selection of Kazakhstan as a first stop is likely no coincidence, as it highlights the importance of the relationship between China and Kazakhstan and recalls the historic 2013 trip, during which President Xi formally announced the launch of the Belt and Road Initiative (BRI). This year, trade between Kazakhstan and China reached an all-time high—increasing 36 percent year-on-year according to the Kazakh Economic Research Institute. In the press release announcing Xi’s state visit, the 20th Party Congress was mentioned as “a gathering of great significance at an important moment” and linked China and Kazakhstan’s development. The read-out of the Xi-Tokayev meeting indicates that China and Kazakhstan plan to broaden their joint cooperation in both the economic and security spheres. Crucially, as Russia’s neighbors have become increasingly uneasy about Moscow’s imperial aspirations due to the war in Ukraine, Xi asserted China’s position and support for Kazakhstan that “no matter how the international situation changes, we will continue to strongly support Kazakhstan in defending its independence, sovereignty, and territorial integrity.” President Xi also voiced support for measures Central Asian states may take to ensure their own internal stability. This sentiment is sure to resonate with Kazakhstan and Uzbekistan, as both states have experienced periods of significant domestic unrest within the last year. This statement is however especially notable when considered against Russia’s swift assistance to Kazakhstan to quell protests, which had led some observers to believe would be used by Moscow to leverage support from Tokayev if needed.

At the Shanghai Cooperation Organization summit, President Xi continued to project strength and sought to deepen economic partnerships within Central Asia. A number of bilateral and trilateral partnerships were agreed, including a $15 billion agreement between China and Uzbekistan and a cooperation agreement on the China, Kyrgyzstan, and Uzbekistan railway construction project.. Talks were also held on finalizing construction of the Mongolian section of the China-Russia natural gas pipeline. These are all key agreements that will aid China’s “Western March” and support economic development and energy security at a critical time as China’s economy grapples with a number of challenges. The real estate market is in free-fall; manufacturers, consumers, and exporters are facing supply-chain disruptions due to the “dynamic zero-Covid” policy; and on September 15 the yuan dropped to its weakest point against the dollar since July 2020. Xi’s legitimacy and power are underpinned by economic growth and his Central Asia trip was as much about his own domestic image as it was about China’s foreign policy.

President Xi’s visit to the region offered further confirmation that China has replaced Russia as the major power broker in the region. China now holds greater economic clout and appears to be the development partner of choice in Eurasia, after Russia undercut its own international standing by launching an illegal and disastrous campaign in Ukraine. Furthermore, Chinese leaders likely see the quagmire in Ukraine as a boon for China’s security along its northern border with Russia and have readily accepted discounted Russian energy exports, which have been necessitated by Western sanctions. Despite the benefits that any quagmire offers in the short-term, there are real tensions related to the war in Ukraine and the negative implications. The readouts from President Putin’s meeting with Xi, as well as those from his meeting with the Indian Prime Minister, suggest that other powers—while not explicitly criticizing Russia’s war in Ukraine—are now willing to express greater concern over this most recent example of Russian aggression. It would, however, be a mistake to conclude that China might withdraw its overall support for Russia as a result. Instead, it is more beneficial to view the China-Russia entente as a strategic partnership vis-à-vis the United States. As long as Washington remains a mutual competitor, strategic cooperation between Beijing and Moscow should be expected. Despite this, Xi’s trip signals that the relationship is becoming increasingly lopsided, as China reaps the benefits of Russia’s self-sabotage.

Post Views: 144
Previous Armenia’s Geopolitics At A Crossroads – Analysis
Next Russian Setbacks Lead India to Reconsider its Relationship with Moscow