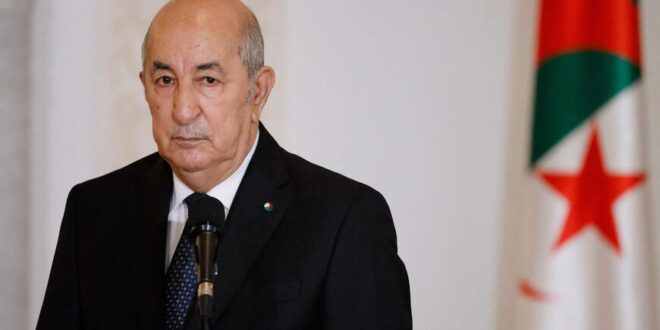 As the war in Ukraine carries on, the list of problematic issues between Algeria and Moscow is growing.

Algeria is actively benefiting from the increased attention to its energy resources from Europe, especially from Italy and France, while at the same time not forgetting to build a counterbalance.

On Nov. 7, Leila Zerrouki, Algerian Foreign Ministry special envoy for international partnerships, announced that the country had formally applied to join BRICS, an alternative to Western integration platforms of a group consisting of Brazil, Russia, India, China and South Africa. This decision was expected and followed the summer statements of Algerian President Abdelmadjid Tebboune, who in recent months repeatedly spoke of the need for the country to maintain a balance and avoid involvement in bipolar conflicts.

Despite the fact that economically powerful China plays the first fiddle in BRICS, in a situation of war in Ukraine and disruption of supply chains, interest in this platform is primarily fueled by Russia’s membership in it.

For Moscow, of course, recent statements by Algeria, Turkey, Saudi Arabia, Egypt and several other countries with problems in their relations with Washington about their intentions to join the BRICS nations are a treat for the senses. However, the idea of institutionalizing BRICS+ is actually in its infancy. As Pavel Knyazev, deputy director of the Russian Foreign Ministry’s Foreign Policy Planning Department and Russia’s sous-sherpa in BRICS, acknowledged in July, there are not even criteria for joining the association, so “it is still incorrect to speak of a timeline for all countries that have applied or have expressed a desire to join.” Obviously, all players understand this, so they consider such alliances on an anti-Western basis as temporary, conditioned by pragmatic calculation.

After the outbreak of the war in Ukraine, Algeria adopted a position that, in the words of Russian Foreign Minister Sergey Lavrov, is officially regarded in Moscow as “evenhanded, objective and balanced.”

In particular, Algeria abstained from voting on the United Nations resolution to condemn the war in Ukraine March 2. Moreover, since then, Moscow and Algeria have maintained a high dynamic of not only foreign policy, but even military contacts. Thus, on Nov. 10, army Chief of Staff Maj. Gen. Said Chengriha and Dmitry Shugaev, director of the Federal Service of Military-Technical Cooperation of Russia, held talks on military cooperation. On Nov. 16, the two countries will begin the Desert Shield 2022 counterterrorism exercise at the Hammaguir testing ground in Bechar province near the border with Morocco. In October, the navies of Russia and Algeria conducted joint exercises in the Mediterranean Sea, and in September, Algeria took part in the Vostok-2022 strategic command and staff military exercises.

In May 2022, Algeria’s Ambassador to Russia Smail Benamara said that Russia and Algeria were preparing a new strategic partnership document to strengthen cooperation in areas not mentioned in the 2001 document. The new document is expected to be signed during Tebboune’s visit to Moscow. Algerian Foreign Minister Ramtane Lamamra noted Nov. 11 that the president’s visit to the Russian capital is being actively prepared, and the Algerian side hopes to have it done by the end of this year.

Nevertheless, according to Al-Monitor sources close to the Russian Foreign Ministry, Tebboune’s trip to Moscow was planned back in July, but was postponed due to “the need to work through the complicated economic and military-technical issues.”

“The situation is somewhat reminiscent of 2016, when former Algerian Prime Minister Abdelmalek Sellal left Moscow, when it seemed that many projects had already been negotiated and only needed to be formalized de jure,” the source noted, adding that since then it has remained uncertain whether or not Russia would build the country’s first nuclear power plant. “The parties are trying to weigh the pros and cons, so that there is no blow to the image.”

In brief, the list of problematic issues in the context of the war in Ukraine between Algeria and Moscow is as follows.

First, in October 2022, it was revealed that a bipartisan group of 27 members of Congress sent a letter to Secretary of State Antony Blinken calling for sanctions against Algeria under the Countering America’s Adversaries Through Sanctions Act, because the North African country had allegedly already signed a new “significant” deal to buy $7 billion worth of Russian weapons, including Su-57 fighter jets. Propaganda tirelessly repeats that potential restrictions will not stop Algeria, especially when the West supports the incorporation of Western Sahara into Morocco. Nevertheless, there is reason to believe that sanctions are being taken into account by the Algerian side. For example, the threat of restrictions has affected Egypt’s desire to buy Russian Su-35 fighter jets.

Second, Tebboune has made it clear to the West that he does not intend to completely side with Russia. In August, during French President Emmanuel Macron’s visit to Algeria, the heads of the French and Algerian security services met, the first such event of this level since the country’s independence. For Paris, such intelligence contacts are important primarily in terms of Algeria’s influence on the situation in the Sahel and its knowledge of the real situation within local rebel and jihadist groups. For Algeria, the big question is the situation in Mali, especially in connection with the withdrawal of French troops from there and the activity of the Wagner Group, a Russian private military company.

Third, the main indicator that characterizes any strategic partnership — trade turnover — between Russia and Algeria is not growing. While in 2016 and 2017 bilateral trade turnover was $3.97 billion and $4.63 billion, respectively, in 2020 and 2021 it was estimated at only $2.91 billion and $3 billion, respectively. At the same time, as recently highlighted by US Ambassador to Algeria Elizabeth Moore Aubin, who has been very active since her appointment in 2022, the United States is seeking to double direct investment in Algeria, as the country’s authorities work to diversify the economy. This is despite the fact that, as the diplomat noted, the United States was the largest foreign direct investor in Algeria in 2020, accounting for 28% ($6.2 billion) of all foreign direct investment in the country.

Fourth, although the main achievement of bilateral relations between Algeria and Russia is military-technical cooperation, Chinese arms are gradually taking an increasing share in the armed forces of Algeria and its regional rival, Morocco. The Algerian leadership intends to use the funds received from the sharp increase in the cost of natural gas on the world market to double the military budget, but it is not certain that most of these funds will be used to buy Russian weapons all at once. Thus, in addition to the purchase of Chinese and now Turkish combat drones, Algeria has already received the first battery of Chinese YJ-12E mobile coastal missile system in a short time after ordering. This Chinese missile system, according to some reports, was purchased instead of the previously planned acquisition of the Russian 3K55 Bastion missile battalion.

Theoretically, the gas issue can be added to the list of contradictions in relations between Algeria and Russia. On the one hand, the Algerian leadership continues to profit from the standoff between Russia and NATO: In the first five months of 2022, Algeria’s state oil and gas company Sonatrach had revenues of $21.5 billion, up from $12.6 billion in the same period in 2021. On the other hand, Moscow is unlikely to seriously consider Algeria’s efforts to increase gas supplies as an attempt to squeeze it out of the European gas market. Not only because Algeria actually has little additional gas to export due to chronic underfinancing in this sector and uses the problems with Spain to refocus on the Italian market, but also because the new contracts at higher prices bring the cost of pipeline gas closer to spot liquefied natural gas sales. This is profitable for Moscow and makes Europeans keep buying Russian energy resources, both officially and on the black market.

Algeria, like other countries in the Middle East and North Africa for which the humanitarian aspects of military action are not as important as those of Western communities, is surprised by the military decisions and level of troop use Russia is showing in Ukraine, and as the Kremlin’s stated goals there decline, Moscow’s value as a balancing act for regional actors diminishes.

In addition, in the medium term, it is unclear how Russian weapons manufacturers intend to carry out maintenance and new orders when the Russian army is suffering heavy losses in ground military equipment, which must be urgently replenished both for combat operations and to maintain its defense capabilities. Nevertheless, one should hardly expect that Algeria, which for decades has been a major importer of Russian military products and still depends on the Russian military-industrial complex for maintenance, will suddenly decide to sharply increase its drift toward Chinese or even Western weapons. In the end, Algeria is likely to use all the above problems in negotiations with Moscow in order to get discounts and certain indulgences beyond the framework of military-technical cooperation and related, for example, to projects in the mining, electric power and nuclear power industries.