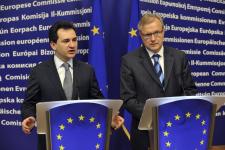 The European Commission is considering Belgrade’s proposal to set aside €120 milion from pre-accession funds to help maintain Serbia’s macroeconomic stability and the budget.

That is according to EU Enlargement Commissioner Olli Rehn.

After a meeting with Deputy Prime Minister Bozidar Djelic, Rehn highlighted that the European Union may start annulling visas for some Western Balkan countries in 2009, given that the reports of the commission’s expert missions had found progress in the meeting of EU requirements by Serbia and other countries of the region.

According to him, support for the stabilisation of the Serbian budget would be yet another proof of the EU’s solidarity with Serbia, which is working to eliminate the consequences of the global financial crisis and maintain macroeconomic stability.

Rehn said this after Djelic handed a letter to the European Commission, which proposes that €120 million be set aside from pre-accession funds for stabilising the budget and hence the continuation of reforms.

Djelic said that he had requested support from the European Commission for an agreement with private European banks in Serbia, to have them delay the repayment of mature debts of Serbian private companies totaling five billion euros this year.

Repayment is supposed to start this year and that is one of the main reasons why Serbia initiated negotiations on assistance from the International Monetary Fund last week.