Macedonia to Cut Spending Amid Crisis 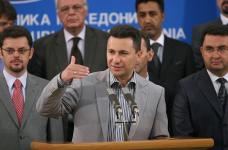 Macedonia is cutting expenses and introducing a set of fresh measures to help its economy caught in the world economic downturn, the government said Tuesday.

The announcement came late yesterday, of a nine percent cut in the state budget previously set at 2.5 billion euros. In addition, predictions released in the government’s press statement predicted that economic growth will fall from five to just one percent this year.

“The negative impact of the global recession on the Macedonian economy is rising, hitting hard all its sectors,” the statement read.

In addition, a new package containing around seventy anti-crisis measures aimed at supporting the economy, will also be set into force.

Loan support for local companies made available through a credit-line from the European Investment Bank of 100 million euros, is earmarked for investment and short-term loans, that will subsidize interest rates for companies and the issuing of guarantees.

The other measures aimed at stimulating the economy include taking steps to encourage export by reducing related expenses.

There is no need yet, for the country to make an arrangement with the International Monetary Fund, PM Nikola Gruevski said yesterday, addressing the speculations that the government will ask for money from the international monetary institution.

But local experts were cited in media saying that the budget, even with the intended restructuring, will remain unproductive and spending oriented. They have proposed redirecting some of the envisaged 850 million euros that was earmarked on spending and investments instead, to go directly toward boosting the economy.

Otherwise, the only capital they plan to set aside is for investments in infrastructure, a total planned spending of around 500 million euros this year which is a record for the state.

The country is also having difficulty with filling the current deficit, and was forced to issue state bonds to do so.