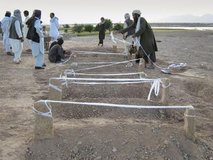 KABUL – Video of the aftermath of a disputed incident involving American forces and the Taliban shows bloodied bodies of children laid out with other corpses, confirming international Red Cross findings at the two remote villages in western Afghanistan. The U.S. military does not contest that civilians died but called “extremely over-exaggerated” a report by an Afghan official that as many as 147 were killed.

Afghans blame aerial bombing Monday and Tuesday for the deaths and destruction. President Hamid Karzai said the airstrikes were “not acceptable” and said the government estimated the number of civilian deaths to be 125 to 130, according to an interview with CNN on Friday.

U.S. officials have suggested that Taliban fighters caused at least some of the deaths, and said investigators on a joint U.S.-Afghan team were still analyzing data collected in the villages of Ganjabad and Gerani in Farah province.

In a video obtained Friday by Associated Press Television News, villagers are seen wrapping the mangled bodies of some of the victims in blankets and cloths and lining them up on the dusty ground.

In one shot, two children are lifted from a blanket with another adult already in it. The children’s faces are blackened, and parts of their tunics are soaked in what appears to be dried blood.

Their limp bodies are then put on the ground, wrapped in another cloth and placed next to the other bodies. It was not clear how many bodies were in the room where the video was shot.

The man who shot the video said many of the bodies he filmed Tuesday in Gerani were in pieces. He spoke on condition of anonymity out of fear of retribution from security agencies.

It was not possible to independently verify the authenticity of the video. The International Committee of the Red Cross also has said that women and children were among dozens of dead people its teams saw in the two villages.

On Thursday, a local official said he collected from residents the names of 147 people killed in the fighting. If true, it would be the deadliest case of civilian casualties in Afghanistan since the 2001 U.S.-led invasion that ousted the Taliban regime.

Villagers “were pointing to graves and saying, ‘This is my son, this is my daughter,'” said Abdul Basir Khan, a member of Farah’s provincial council. He said he gave his tally to the investigators.

The U.S. military described that toll as over the top.

“The investigators and the folks on the ground think that those numbers are extremely over-exaggerated,” U.S. military spokeswoman Capt. Elizabeth Mathias said. “We are definitely nowhere near those estimates.”

Karzai has long pleaded with the U.S. to minimize civilian deaths during its operations. Past incidents have drawn immediate outcries from the government, which contends that such killings undermine support for the fight against the Taliban

“The airstrikes are not acceptable,” he told CNN. “This is something that we’ve raised in the Afghan government very clearly, that terrorism is not in the Afghan villages, not in Afghan homes. And you cannot defeat terrorists by airstrikes.”

The incident comes as the Obama administration is gearing up to roll out a new strategy for the region, which involves linking success in Afghanistan with security in neighboring Pakistan, where Taliban militants are active along the border. The U.S. has also pledged long-term nonmilitary efforts here — for example, civilian expertise in farming and other specialties — along with an increase of 21,000 U.S. troops.

“If there’s one lesson I draw from the past, it is the importance of our staying engaged,” Defense Secretary Robert Gates told reporters Friday at Forward Operating Base Airborne in northern Afghanistan, shortly before heading back to Washington.

“And if there’s a lesson for Americans and the international community, it’s that we don’t dare turn our backs on Afghanistan. This will work if we stay engaged.”

On Friday, a U.S. Air Force Predator drone went down in southern Afghanistan’s central Ghazni province, Mathias said. She ruled out insurgent activity in the area of the crash in Qarabagh district.

However, Zabiullah Mujaheed, a Taliban spokesman, said the militants had shot the drone down. It was impossible to verify his claim.