Macedonia Visa Liberalisation on the Cards 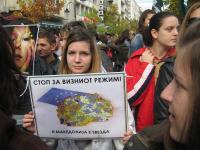 Macedonia is well on the way to being granted a full visa liberalisation for travel to the EU, local media said Wednesday citing an unnamed diplomatic source.

The European Commission’s assessment of whether the countries in the Western Balkans have fulfilled the requirements for the abolition of the visa regime to the EU gives Macedonia the highest grades, the source told local Makfax news agency.

According to this source, the country got the highest scores for personal documents safety and respect of fundamental rights, whereas the scores for the country readmission readiness, illegal migration and public order and safety, were a notch lower.

So far the EC has not officially disclosed details.

A positive assessment will the visa requirements to be lifted by the start of next year.

Visa liberalistation is awaited with much expectations. Some surveys show that as many as 70 per cent of the young people from the region have barely traveled outside the region. Their only notion of Western Europe is what the see on the TV, leaving them ignorant about the wider world, and analysts say more susceptible to manipulation.