Panic But No Deaths As Quakes Hit Macedonia 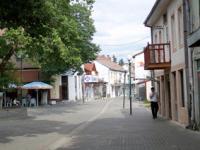 Fearful locals in the southeast Macedonia slept out under open skies on Sunday night after over 180 earthquakes hit the region over the weekend.

The strongest tremor hit at 6.15pm on Sunday, measuring 5.4 at the Richter scale. It was felt across the country and in the capital, Skopje. Smaller earthquakes began on mid-Saturday and were also felt all through Sunday night.

The epicentre of the quakes was closest to the town of Valandovo, some 120 kilometres southeast of Skopje. Many residents of the nearby towns of Strumica, Dojran and Gevgelija were panicked.

So far there have been no reports of human casualties. But the A1 TV station reported that several houses had collapsed in the village of Basibos near Valandovo. Older houses were damaged by tremors across the region, local media said.

The Interior Ministry and the Crisis Management Centre are engaged in providing relief in the areas where it is needed, MIA news agency said. The series of earthquakes is still not over, the state’s seismological observatory in Skopje warned.

Post Views: 260
Previous US Appeals To Albanians To Apply For New IDs
Next New Trade War Erupts Between Bosnia and Croatia