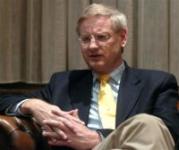 A former High Representative for Bosnia and Herzegovina has declined an invitation from Radovan Karadzic to appear as a witness in regard to an alleged immunity agreement between Karadzic and former US envoy Richard Holbrooke.

Carl Bildt, the first High Representative for Bosnia and Herzegovina and current Swedish foreign minister, has declined to appear at the Hague-based International Criminal Tribunal for the former Yugoslavia, ICTY, as a witness in regard to the immunity agreement that was allegedly reached between Richard Holbrooke and Radovan Karadzic.

Bildt said that he did not have “relevant information on the alleged immunity agreement.”

“There are no legal obstacles to Mr Carl Bildt giving testimony in the case or to being interviewed by a representative of the accused. However, the tribunal should be informed that Mr Bildt is of the view that, to the best of his knowledge, he has no relevant information on the alleged immunity agreement to convey, and he therefore considers that his testimony and an interview with him serve no purpose,” the Swedish Justice Ministry wrote in a letter to the ICTY.

Wartime Bosnian Serb leader Karadzic, indicted by the ICTY on charges of genocide, crimes against humanity, and violation of the laws and customs of war, filed a motion before the Tribunal last month asking for the withdrawal of the indictment against him on the grounds that he had an agreement with the former US special envoy to the Balkans.

Karadzic said the agreement, allegedly reached in 1996, guaranteed that he would not be prosecuted if he withdrew from public and political life.

In his motion, Karadzic said that he was willing to testify about the agreement, and to call other witnesses who would confirm his statements. One of the witnesses Karadzic proposed was Bildt.

The current Swedish foreign minister, and former prime minister and EU special negotiator, was High Representative for Bosnia from December 1995 to June 1997.

In his motion, Karadzic presented evidence to support his claim, including excerpts from a book by the Scholars’ Initiative, headed by Professor Charles Ingrado, where it is stated that the agreement was reached though it was not put in writing.

The book states that Bildt can confirm that after the Holbrooke-Karadzic agreement, Karadzic promised to withdraw from public life.

The letter from the Swedish Justice Ministry questions the purpose of looking for confirmation that the agreement existed, since it will not influence the indictment or the trial itself.

“Even if the assertion of the immunity agreement were correct, it would have no relevance to the question of the accused’s guilt or innocence of the charges against him . . . Should the Trial Chamber consider otherwise, Mr Bildt would of course readily make himself available for interview,” the Ministry letter concludes.