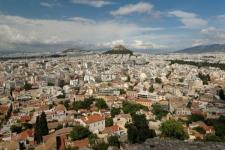 A group of some 20 people, some of them reportedly wearing masks, stormed a press conference late on Tuesday in Athens during which the Rainbow party of Macedonians in Greece was promoting a new Greek-Macedonian dictionary, according to local media reports.

They group began destroying the promo material and damaging some of the cameras, verbally attacking the promoters and guests, including renowned US Slavist and linguist Victor Friedman, Kanal 5 said. The group fled the conference after hearing that police were on their way, and the conference resumed without further incident.

So far there have been no reported official reactions from either Greece or Macedonia.

Rainbow leader Pavle Vaskopoulos told Kanal 5 that the incident was a sign that “the Greek authorities are beginning to fear Macedonian activism in Greece”. He sees this only as a warning sign against their recent activities.

The two countries are engulfed in a long-standing row over the use of Macedonia’s formal name. Relations soured severely last year after Athens blocked Skopje’s NATO accession because of the row, insisting that because the northern Greek province is named “Macedonia,” Skopje’s insistence on using the same name implies territorial claims towards Greece.

The Greek nationalist movements strongly oppose the release of this 15,000-word dictionary prepared by Vasko Karadza, arguing that the Macedonian language does not exist. The Greek state refers to Macedonian as a “Slavic idiom”. On the other hand, promoters say that the dictionary is a testimony to the existence of the Macedonians and their language.

Golden Dawn was recently registered as a political party and reportedly has close ties with the parliamentary nationalist party LAOS, led by Georgios Karatzaferis.