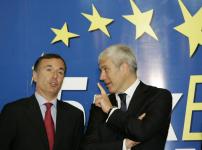 “Italy is decisively engaged in convincing its partners in the EU who do not support the unfreezing of the Interim Trade Agreement to unblock it,” the minister told daily Vecernje Novosti daily.

The trade deal is part of the Stabilization and Association Agreement, SAA, signed last spring and immediately suspended due to the Netherlands’ strong opposition. The Dutch are vehemently opposed to thawing the agreement before fugitive Ratko Mladic is brought before the Hague Tribunal.

Frattini said the decision to lift visa restrictions for citizens of Macedonia, Montenegro and Serbia represents the most efficient instrument for EU representatives to promote the visibility of the EU integration process.

“I’m convinced that this decision will upgrade relations among people, further the economic cooperation of those countries [with EU member states] and allow them to explore EU countries,” he added.

The minister denied any suggestion that the EU intends to exclude Kosovo residents from the visa-free regime, stressing that the European Commission is continuing its talks with Serbian government officials in order to find a solution concerning the issuance of passports to Kosovo Serbs.

According to Frattini, Italy favours a summit involving EU prime ministers and the US, which would give concrete support to the EU integration process of the remaining Balkan countries.