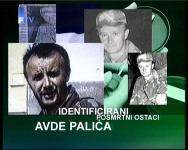 The remains of Bosnian war hero, Colonel Avdo Palic, have been identified after a 14 year search, local media reported on Wednesday. During the 1992-95 war, Pavic commanded the defenders of the Bosniak (Bosnian Muslim) enclave of Zepa.

After Bosnian Serb forces overran nearby Srebrenica on July 11, 1995, massacring around 8,000 Bosniak men, children and elderly, they moved on Zepa.

On July 27, Palic – accompanied by UN peacekeepers – went to meet Bosnian Serb commander Ratko Mladic to negotiate the surrender of Zepa and withdrawal of Bosniak soldiers and civilians from the town. Both Srebrenica and Zepa were declared “safe zones” by the UN.

Many experts agree that this deal prevented another bloody massacre in eastern Bosnia. Yet, while Bosniaks left the town, Palic was imprisoned by Bosnian Serb forces. He was last seen alive in the north-eastern town of Bijeljina in August 1995.

For 14 years Palic’s wife Esma pleaded and urged Bosnian Serb and international officials to help her find and bury her husband’s body.

Local media, citing Amor Masovic from the Institute of Missing People of Bosnia and Herzegovina, reported on Wednesday that DNA analysis had confirmed that one of nine bodies exhumed from a mass grave near the eastern Bosnian town of Rogatica is that of Palic.

Palic’s body was exhumed in 2001 but was not identified until now. Masovic said additional tests are required since the remains of different people had been mixed with those of Palic in the mass grave.

His widow told reporters that, given she has waitied 14 years, she can wait a bit longer until the DNA results are confirmed. She added that her fight does not end here and pledged to keep on pushing until her husband’s killers are identified and prosecuted.