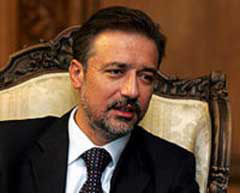 Branko Crvenkovski, the leader of the opposition SDSM encouraged the government to engage itself in substantial negotiations over the name in order to reach a settlement on the perennial dispute with Greece.

Crvenkovski sent a message that SDSM will not take populist approach and called the Government “to launch real negotiations with Greece, different from the ones led up until now.”

The opposition leader underlined that Macedonia’s Euro-Atlantic integrations have been put on standstill over the name dispute.