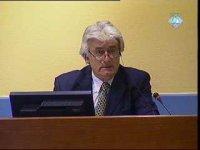 The judge indicates that the Radovan Karadzic case is “ready for trial”, though he declines to set a date for the trial to begin.

Iain Bonomy said that the Radovan Karadzic case is “ready for trial” and that he will inform the Court President of this.

However, a date has not been set for the beginning of the trial of the former president of Republika Srpska, who is charged with genocide and a number of other crimes committed in Bosnia and Herzegovina. The Prosecution has indicated that once the date is set it will need about four weeks to undertake preparatory steps.

“Once the date is set for this trial to begin, we need to inform the witnesses and undertake all necessary preparatory steps. On the basis of previous experience, we can say that this may last for four to six weeks. In this case the Prosecution would need about four weeks,” Prosecutor Alan Tieger said.

After having been on the run for years, Karadzic was arrested in Serbia on July 21, 2008. Ten days later he made his first appearance before the Hague Tribunal. He denied the allegations in the indictment charging him with genocide committed in Srebrenica and ten other Bosnian municipalities, as well as numerous other crimes committed on the territory of Bosnia and Herzegovina, including the three-and-a-half year siege of Sarajevo.

Karadzic used a large part of this status conference to complain about “technical problems” in preparing his defence, such as the reading of the voluminous material, contacts with legal advisors, using technical tools in the Detention Unit and other “issues related to this shaggy, unattended, engorged case of huge importance”.

“You do not have control over your case. You have shown us that you are not using in a correct manner the resources assigned to you by this Court. You have a special liaison officer who conveys your problems to the Trial Chamber. Now, you are mentioning a number of issues that have never been conveyed to me before,” Judge Bonomy told Karadzic.

The Prosecution announced that by the end of this week, or the beginning of next week, it will file the fourth motion requesting acceptance of already determined facts based on the second-instance verdict against Momcilo Krajisnik. A former speaker of the Republika Srpska Assembly, Krajisnik was sentenced to 20 years in prison.

“As part of preparations for this trial, we are making two groups of witnesses. The first group consists of people we have to invite by all means, while the other is a reserve group. At this moment we are transferring the witnesses, whose statements were determined in the mentioned verdicts, to the reserve list. This list is becoming bigger and bigger every day,” Prosecutor Alan Tieger said.

The Prosecutor mentioned that the motion referred to 900 facts determined in the mentioned verdict. The Trial Chamber allowed the Prosecution to file the motion, adding that it hoped that this motion would help reduce the list of witnesses to be invited to testify.

“At some stage one has to say that all preparations for the trial have been completed and the trial will begin on the basis of what has been included in the case file to date. You now have the Prosecution’s allegations covering the 900 determined facts, although the facts have been presented in a different manner. At some stage one has to draw the line though,” the judge said.

The status conference participants also discussed the indictee’s request to talk to one Prosecution witness, who is “very important” for the count pertaining to the Markale massacre.

Two massacres were committed at Markale marketplace in Sarajevo during the course of the war. On February 5, 1994, 67 residents of Sarajevo were killed, and 142 were wounded. In the second massacre, in August 1995, 37 people were killed and 90 were wounded.