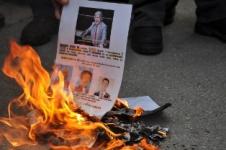 Several hundred members of victims’ associations have protested in front of the Hague Tribunal and Prosecution building in Sarajevo, setting photos of judges, prosecutors and indictees on fire.

Organisers said the protest was intended to express dissatisfaction with a proposal from the Trial Chamber, sitting in the case of Radovan Karadzic, that the Prosecution reduce the indictment against the former Bosnian Serb president and not present evidence pertaining to certain crimes.

Protestors burned photos of Patrick Robinson, the president of the International Criminal Tribunal for the former Yugoslavia, ICTY, Chief Prosecutor Serge Brammertz and O-Gon Kwon, the judge chairing the Trial Chamber that will hear the Karadzic case. They also set photos of Karadzic on fire.

Association representatives asked for an urgent meeting with senior Tribunal officials, saying that if the indictment is reduced they will refuse to cooperate with the ICTY. BIRN-Justice Report has learned that a group representing victims will travel to The Hague today.

“The victims will no longer appear as witnesses at trials. We will ignore them. We will not take part in the work of the Tribunal. They know they cannot go on without our help. So, they should then release Karadzic,” Munira Subasic from the Mothers of Srebrenica and Zepa Enclaves association told reporters.

Karadzic’s trial is due to begin on October 19. He has been in custody since July 2008.

In order to make the trial more efficient, the Prosecution announced that it would “reduce the number of witnesses and the time needed for their examination” in presenting its case.

“The Chamber considers that the Prosecution should complete its evidence presenting within one year. The Defence is given the same amount of time. The case is due to be completed within the next 30 months. In the worst-case scenario, the trial should not last for more than three years,” Judge Kwon said at a status conference held on September 8.

In order to ensure “the speed and fairness of the trial”, the Chamber proposed that the Prosecution further reduce the indictment, in part, by reducing the time needed to demonstrate that “ethnic cleansing” took place through reference “to 10 or 12 municipalities”, instead of incidences in 27 communites covered by the original indictment.