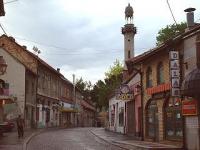 The Bosnian town of Tuzla has filed criminal charges against the prime minister of the Serb-dominated Bosnian entity of Republika Srpska for denying that massacres of civilians in Tuzla and Sarajevo took place during the 1992-95 war.

Milorad Dodik has said that a Serb mortar attack in 1995 that killed 71 people in Tuzla was a set-up and says that dead bodies were brought from elsewhere.

“This was the biggest tragedy in the history of Tuzla and town councillors and citizens have taken this arrogant and unbelievably cruel statement from Mr Milorad Dodik in a very painful and dramatic way,” said Tuzla mayor Jasmin Imamovic, to the Reuters news agency.

Prosecutors have filed several criminal charges against Dodik, including the incitement of ethnic, racial and religious hatred, Imamovic told Reuters.

In May 1995, Bosnian Serb forces shelled Tuzla, which was a United Nations safe zone. One missile hit the centre of the town killing 71 people and wounding more than 150.

Dodik insists that Djukic is innocent. He has also questioned the massacres at Sarajevo’s main market Markale in 1994 and 1995, when 68 people were killed and 144 wounded, and a further 37 people killed and 90 wounded, respectively.

Last week the Office of the High Representative issued a statement condemning such denials: ”Any attempt to change the established historical record of war crimes is unacceptable and inexcusable. When such misstatements come from an official in a position of high responsibility, an official who is obliged to uphold the Dayton Peace Accords and cooperate with the ICTY, they are particularly irresponsible.”