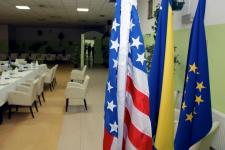 Emergency negotiations, convened by senior European Union and US officials and attended by the leaders of Bosnia’s three main ethnic groups, have started in an attempt to break the country’s political deadlock.

The meeting started with a joint dinner on Thursday evening and continued on Friday morning. It is taking place in the EU peacekeeper’s camp Butmir near the Bosnian capital of Sarajevo.

Echoing the sense of urgency given to these talks, and the fact they are taking place in a military base, some media have dubbed the negotiations “Dayton 2,” after the November 1995 peace talks in the Wright-Patterson Air Force base near Dayton, Ohio, which ended Bosnia’s 1992-5 war.

The meeting takes place amidst the biggest political crisis since the end of the Bosnian war. Vicious political rhetoric between local political leaders, that began in the run up to the 2006 general elections, has over the past three years continued to escalate, and has intensified over past months.

The Butmir meeting is chaired by the US Deputy Secretary of State James Steinberg and Carl Bildt, Foreign Minister of Sweden, which currently holds EU’s rotating presidency. The two will be accompanied by EU Enlargement Commissioner Olli Rehn, former, current High Representatives Miroslav Lajcak and Valentin Inzko and other senior EU and US diplomats.

They will try to break the stalemate in Bosnia’s political scene and steer the country away from its current treacherous course. They will impress on local leaders the importance of focusing on EU and NATO accession negotiations.

The international community will present local leaders with a package of conditions and incentives, which according to western sources was worked on until the very last moment.

According to these sources, the package may contain significant constitutional reform measures, including a shift from Bosnia’s current tripartite presidency; an increased number of deputies in the state parliament and a reinforced role for Bosnia’s Council of Ministers.

The package also requires implementing the outstanding conditions for the Office of the High Representative, OHR, to close.

In order to accept these measures, local leaders will be offered faster NATO membership, a visa-free regime with the EU and maybe even the status of the EU candidate country, the sources said.

“Reaching agreement on needed reform will be difficult. The October 2010 elections are already influencing the actions of political leaders,” Steinberg and Bildt said in a joint public letter to all residents of Bosnia and Herzegovina.

“Whatever the apparent benefit of short-sighted political actions, we hope your leaders will also weigh the terrible long-terms costs of inaction. Other countries in the region are racing ahead in their NATO and EU perspectives. There is a genuine risk, if steps are not taken now, that Bosnia and Herzegovina will be left behind,” the letter read.

Yet few local officials and experts appeared impressed with the wording of the letter. For years all main local politicians have been aware that their bickering has been pushing the country towards crisis, yet have failed to stop their in-fighting, media outlets commented.

The meeting will be attended by the heads of seven main Bosniak (Bosnian Muslim), Serb and Croat parties.

The Bosnian Croats are being represented by the leaders of the Croat Democratic Union, HDZ and HDZ 1990, Dragan Covic and Bozo Ljubic.

Bosnian Serbs are represented by the leader of the ruling Alliance of Social Democrats, SNSD, Milorad Dodik and representative of the Party of Democratic Progress, PDP, Branislav Borenovic.

Dragan Cavic from the recently established Democratic Party refused the invitation to attend the meeting while the second-strongest Serb Democratic Party, SDS, was not invited at all. Local and international analysts say this was a major gaffe by the EU and US organisers.