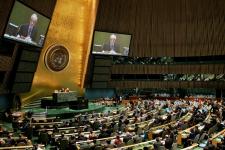 The UN General Assembly has elected Bosnia and Herzegovina a non-permanent member of the UN Security Council, UNSC, to the delight of local officials.

The country’s election is “The biggest achievement of Bosnia and Herzegovina foreign policy since independence in 1992,” boasted the main headline in Friday’s edition of Sarajevo daily Dnevni Avaz. All other Bosnian newspapers also carried the news on their front pages.

On Thursday afternoon, the General Assembly elected Bosnia and Herzegovina, Brazil, Gabon, Lebanon and Nigeria to serve as the five non-permanent members of the Security Council for two-year terms, from January 1, 2010.

Unlike in most previous elections, there were no contested seats, and the five countries, nominated by regional groups, were easily elected in the first round of voting. The 192-member Assembly gave 186 votes to Nigeria, 184 to Gabon, 183 to Bosnia, 182 to Brazil and 180 to Lebanon.

This is the first time Bosnia has served on the UNSC. It will be representing East European states, taking over from Croatia, which has held the group’s seat for the past two years.

“This is a great responsibility which we have received from the whole world,” Bosnia’s ambassador to the UN, Ivan Barbalic, told the country’s state PBS television station in a telephone interview from New York.

“With this, the world has shown what it thinks of Bosnia and Herzegovina,” said the Bosniak (Bosnian Muslim) member of the country’s tripartite presidency, Haris Silajdzic.

Being a “non-permanent membership of Bosnia and Herzegovina in the UN Security Council has invaluable importance,” Foreign Minister Sven Alkalaj commented.

“Successfully implementing the mandate of a non-permanent member of the UN Security Council will strengthen the image, influence, reputation and influence of Bosnia and Herzegovina in the world, and open up many political and economic doors which would be very difficult to open otherwise,” Alkalaj added.

While, on one hand, Western diplomats expressed their hope that the election of Bosnia and Lebanon – two politically divided countries, still wracked by tensions – would help strengthen their fragile institutions, on the other, they warned that their Council membership could create some odd situations in the UNSC.

Both Bosnia and Lebanon remain subject to UNSC scrutiny and both countries still host Western peacekeeping forces. Currently, 12,500 UN peacekeepers are stationed in southern Lebanon, while a 2,000-strong EU-led deployment is stationed across Bosnia.