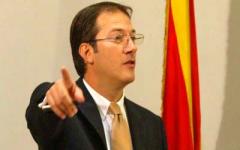 Macedonia’s border agreement with Kosovo is a classic example of an exchange of territories made in murky conditions and outside the law, Macedonia’s opposition parties allege.

The neighbouring states announced on Sunday that they had closed their long-standing border issue. Macedonia’s parliament ratified the agreement on Saturday with a simple majority vote.

The vice president of the opposition Liberal Democrats, LDP, Andrej Zernovski, told reporters that the vote violated Article 74 of the Macedonian Constitution, which, he says envisages significant border changes requiring a two-thirds majority vote in parliament. “It is clear that the border is changed significantly,” he said. The LDP plans to contest the border agreement in the Constitutional Court.

Branko Crvenkovski, the head of Macedonia’s leading opposition party, the Social Democrats, agreed the adoption of the deal was in “clear violation of the Constitution and the rule of law”. However, he did not say whether his party would join the LDP suit.

Crvenkovski noted in comments to reporters that, “In Kosovo the deal was adopted with a two-third majority in parliament.”

The details of the border deal were not officially publicised. However, A1 TV came up with a map on Tuesday showing that Macedonia gave up a small area around the Kodra Fura border outpost, near Debelde village, in exchange for a similar area in the Crn Kamen region.

The government insists that the deal was simply a technical demarcation of the border, which had remained unmarked for a long time due to a spat between Belgrade and Pristina over which has jurisdiction over the Kosovo side.

Prime Minister Nikola Gruevski said yesterday that opposition efforts to dispute the deal would be “in vain”.

He said that, with the closure of this issue, “Macedonia is the only country, deriving from the former Yugoslavia, that has solved all of its border disputes.”

The agreement, and linked establishment of full diplomatic relations between Macedonia and Kosovo, was welcomed by the US and major EU states. However, Serbia which strongly opposes Kosovo’s independence, protested.