Diplomats Gather from East and West on Bosnia 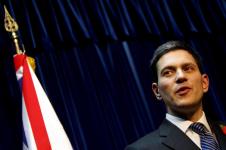 Less than 24 hours after the visit of Russian Foreign Minister Sergei Lavrov to Bosnia, his British counterpart David Miliband is expected to arrive and add his voice to the diplomatic efforts aimed at breaking the country’s political deadlock.

The visits by Lavrov and Miliband on Thursday and Friday respectively are taking place amidst ongoing talks between senior Bosnian, EU and US officials about a set of reforms aimed at streamlining some of the decision making processes in the country, in return for concessions on visa liberalisation and EU accession.

These heightened diplomatic efforts come ahead of a meeting by the Peace Implemenation Council, PIC, composed of the 55 countries and international organisations that sponsor Bosnia’s peace process and the work of the Office of the High Representative, OHR, in the country.

In the run-up to the meeting on 18 to 19 November, media have speculated that the PIC will once again discuss closing the OHR. Its closure has been on the agenda for a long time, but the PIC has so far decided against it given the worsening political divisions in the country.

Bosnia’s High Representative Valentin Inzko said that it is “not likely” that PIC will decide to close the OHR at this meeting, as negotiations between EU, US and Bosnian officials are still ongoing.

Nevertheless, political analysts say negotiations and diplomatic visits seem to be shifting gradually towards favouring the OHR’s closure, and away from the interventionist approach symbolised by the High Representative’s presence.
Such a position has long been put forward by Russia. Russian Foreign Minister Sergei Lavrov on a visit to Sarajevo Thursday again reitterated this position: “We believe that Bosnia and Herzegovina must take the responsibility for its own destiny,”

He stressed that Russia would “invest its utmost efforts” to promote the prompt closure of the OHR, a position shared by Bosnian Serbs. Russia is historically seen as an ally to Serbs in the Balkans.

“The time is up for the OHR to close if the international community wants to retain its authority in Bosnia,“ the premier of the Serb-dominated Bosnian entity of Republika Srpska, Milorad Dodik, told journalists during Lavrov’s visit.

Many EU officials share this view as they find the existence of an international body with governing powers irreconcilable with Bosnia’s EU membership aspirations, and would prefer to see a lighter international presence.

Bosniaks (Bosnian Muslims) oppose closing the OHR at the time of the country’s worst political crisis since the end of the 1992-5 war, a position shared by the US, Turkey and Japan.

Analysts say the UK has tended to share this view, but has recently kept silent on the issue. They eagerly await Miliband’s visit to see what the UK has to say.

Some of the local and international officials fear that closing the OHR, without some other continued international guarantees for the territorial and constitutional integrity of Bosnia and Herzegovina, could lead to the country’s final breakup and maybe even new violence.

“International presence will be necessary in Bosnia in future but we have to decide at this PIC or next PIC in what capacity we are staying in Bosnia and Herzegovina; whether it will be in the present form of the OHR or in the future as the EUSR (EU Special Representative) but definitely the international presence is necessary,” Inzko said.

Over the past month, senior EU and US officials have launched a series of intensive negotiations about a package of constitutional and other and reforms which in their view would improve the functionality of Bosnian administration, break the political deadlock and allow closure of the OHR.

Yet at the very start of negotiations, most local leaders rejected some or all of the proposed package.

The next meeting of Bosnian and EU-US leaders is scheduled for next week, after local politicians submit their written proposals for constitutional and other reforms.

Technical EU-US teams currently remain in Bosnia in an attempt to negotiate a compromise.