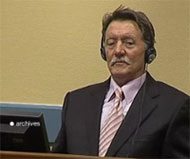 A former Bosnian Serb army general has lost his appeal against a conviction for war crimes committed during the 43-month siege of Sarajevo.

The judge said Dragomir Milosevic did more than merely tolerate the actions of the army: by intensifying the campaign against the city he encouraged his subordinates’ crimes.