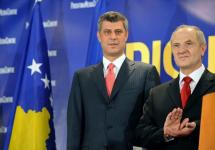 Kosovo’s government coalition has collapsed, it emerged on Thursday night.

Tensions between the two parties have been mounting after a fierce campaign, especially in Pristina, in the run-up to Sunday’s local elections, and talks of a spilt have been widely rumoured in recent months.

Well placed sources confirmed to Balkan Insight that the coalition was dead.

PDK is now expected to form a governing coalition with of the New Kosova Alliance, AKR, making controversial businessman Behgjet Pacolli president of the country, and the Democratic League of Dardania, LDD, giving Nexhat Daci the role of parliamentary speaker.

After the preliminary results of the local and mayoral elections of November 15 were published on Monday, LDK decided to reach an agreement with the Alliance for the Future of Kosovo, AAK, led by opposition leader and former prime minister Ramush Haradinaj.

According to this agreement, AAK would support the LDK candidate for the mayor of Prizren in the run off scheduled to take place on December 13 against the PDK candidate.

PDK and AAK have become the main political rivals in Kosovo since 2007, when PDK reached an agreement with LDK.

PDK considered the Prizren agreement a unilateral split of the governing coalition by LDK.

PDK sources told public broadcaster RTK that AKR and the LDD will become part of the governing coalition tomorrow at 2pm. Beside PDK, LDD and AKR, the new coalition will also consist of minorities represented in Kosovo’s Parliament, including the Serbian Liberal Party.

According to constitution, the president can be changed by parliament if two-thirds of assembly members vote in favour, but only in cases when he is unable to continue his duties due to illness, if he has been sentenced by a court, or if he has violated the constitution.