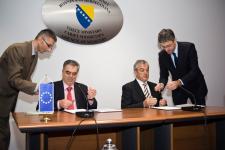 The European Union and Bosnia signed on Tuesday an agreement on an anti-crisis package for the Balkan country worth 39 million euros.

“This is a solidarity package which will enable Bosnia to overcome and respond to the global economic crisis,” the head of the European Union delegation to Bosnia Dimitris Kourkoulas said after the signing ceremony.

“This grant contribution represents a trigger for substantial finances through loans from international financing institutions, such as the European Investment Bank and the European Bank for Reconstruction and Development,” he added.

The 39 million euros are to be provided from the EU Instrument for Pre-Accession Assistance, IPA and will be used to support development of small and medium enterprises, for significant investments in the transport, environment and energy sectors and for projects increasing the coverage of the deposit insurance.

“We are grateful for the assistance as the financing infrastructure is the best assistance for the economy of a country, especially under the circumstances when the foreign investments are reduced,” Bosnian Minister of Finance and Treasury Dragan Vrankic said.

The assistance is a part of the European Economic Recovery Plan which was announced by the European Commission in November 2008.