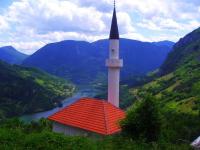 The spiritual leader of Bosnia’s Muslims Mustafa Ceric said that Switzerland’s ban on building minarets is a violation of basic human rights and a sign that Europe is in deep moral crisis.

Ceric said that on the day of one of the two greatest Muslim holidays, Eid-al-Adha, Switzerland sent a “discouraging” message that Islamic “religious and cultural symbols are unwelcome.”

“It is discouraging and is not telling about Europe in which all people and all nations enjoy equal rights and are equally respected,” Ceric said in a statement.

“It is obvious that Europe is not only in an economic, but also in a deep moral crisis,” he added.

Ceric said he hoped that Europe will realize this and return to its own “seriously undermined” human rights values.

“Europe should see in Muslims partners for economic and moral recovery,” he said adding that for Muslims it was most important that they be “guaranteed the right to live in Europe without fear for the future of their children.”

Switzerland which has the population of some 7.7 million is home to over 300,000 Muslims, mainly from Bosnia, Kosovo and Turkey.

In a Sunday referendum initiated by two right wing parties despite oposition from the Swiss government, 57 per cent of Swiss voters approved a ban on minarets atop mosques in their country.