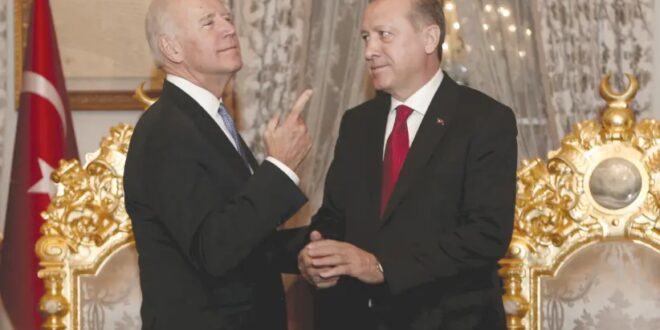 In recent months, Turkey has increased its presence in northern Iraq. It has been accused of deforestation and depopulation of villages, including minority Christian villages.

US Ambassador to the UN Linda Thomas-Greenfield expressed concern on Saturday over Turkey’s airstrikes on a refugee camp in Iraq.

It is the latest Turkish attack, reputedly using an armed drone, deep inside Iraq, leaving civilians afraid and leading to questions about why Turkey has impunity to attack other countries and civilian areas.

“Yesterday, I made clear to Turkish officials that any attack targeting civilians at Makhmour refugee camp would be a violation of international and humanitarian law,” Thomas-Greenfield wrote. “I’m deeply concerned about violence near the camp today and call on all sides to respect the rights of refugees.”

Three people were killed in a suspected Turkish airstrike near Makhmour camp in northern Iraq on Saturday afternoon, according to Rudaw, a media group in the autonomous Kurdistan Region of Iraq.

“It was an airstrike and took place near Makhmour refugee camp,” Sirwan Barzani, commander of Peshmerga forces on the Makhmour-Gwer front, told Rudaw. “According to confirmed information, three people have died.”

“A resident of the camp, who asked to be identified only as Ahmed, had earlier told Rudaw that Turkish air forces bombed the camp, killing at least one person and injuring a second,” the report said.

On June 2, “Erdogan has warned Iraq that Turkey will ‘clean up’ a refugee camp which it says provides a safe haven for Kurdish militants, threatening to take its long military campaign deeper inside Iraqi territory,” Reuters reported.

Turkey often threatens attacks on refugees near Ayn Issa and Tel Rifaat in Syria. Turkish-backed Syrian extremists have also cut off water to parts of eastern Syria at Ankara’s behest.

Makhmour camp is 180 kilometers from Turkey on the border of the Kurdistan Region and areas controlled by federal Iraqi forces. The area was threatened and attacked by ISIS in 2014. Turkey claims the camp produces “terrorists,” but there is no evidence of any “terrorist” attacks from the camp.

In recent months, Turkey has increased its presence in northern Iraq. It has been accused of deforestation and depopulation of villages, including minority Christian villages.

Ankara has also threatened to invade Sinjar, where Yazidi minorities live. Turkey appears to systematically target every area in Iraq and Syria where minorities, such as Kurds, live.

US concern for the refugees represents a major shift from the Trump administration, which tended to never mention Ankara’s attacks on civilians. Some US officials privately even saw extremist groups such as HTS as an “asset” in Syria and lobbied the US to provide more support for Ankara and its extremists.

Turkey has increasingly become a closer partner of Iran and Russia and works with authoritarian regimes such as Venezuela and Belarus.

In November 2019, Turkey carried out airstrikes near Makhmour refugee camp. The airstrikes damaged several areas and killed at least one fox, photos showed.

Turkey provides no evidence that its strikes harm “terrorists.” It has been increasingly using drones in its wars and seeking to sell drones to other countries.

It is unclear if its attacks are partly designed to showcase its drones or to distract from domestic political problems, such as a Turkish crime lord who has been making accusations against Erdogan’s inner circle in recent weeks.

Post Views: 107
Previous The US in the Eastern Mediterranean Region
Next Former US President Donald Trump denounces Fauci, China; hints at 2024 run