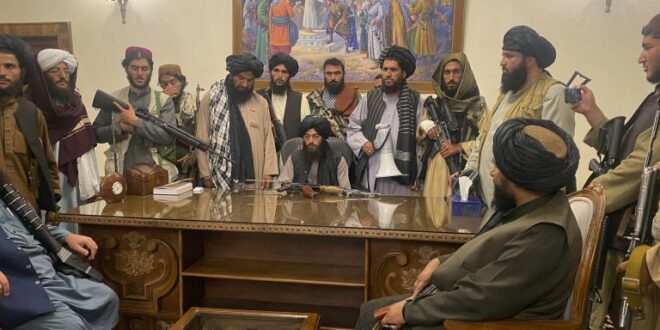 The Afghan capital of Kabul has fallen to the Taliban, as fighters marauded through the city, effectively sealing their control of the country.

CJCS General Mark Milley noted that terrorist groups like al-Qaeda and the so-called Islamic State could reconstitute in Afghanistan much sooner than expected.

The Taliban seizing control in Afghanistan is a multi-sector failure of policy, intelligence, capacity building efforts, and diplomacy.

Grave concerns are rising for the humanitarian, human rights, and human security impact of Taliban control in Afghanistan, with observers anticipating severe safety risks to civilians and particularly activists.

The Afghan capital of Kabul has fallen to the Taliban, as fighters marauded through the city, even posing for a photo opportunity in Afghanistan’s Presidential Palace. Afghanistan’s president, Ashraf Ghani, fled the country on Sunday in anticipation of the Taliban’s advance. Chaotic scenes unfolded at Kabul’s Hamid Karzai International Airport, with desperate Afghan civilians rushing the airfield in attempts to escape by any means necessary. United States Marines arrived at the airport and took up position to help evacuate remaining American diplomats and citizens from the country. There have been numerous reports of the Taliban executing Afghans believed to have assisted the U.S., including in Kandahar, Spin Boldak, Farah, and other provinces. Journalists have also been targeted. The Taliban will move quickly to implement their harsh rule, and the momentum generated from their swift victory will likely bring the group new supporters, growing their ranks.

There are many unanswered questions facing the Biden administration, including how the administration so grossly miscalculated that the Afghan National Defense and Security Forces (ANDSF) would be able to withstand a Taliban offensive for up to eighteen months. Despite twenty years of U.S. and coalition training, funding, and equipping ANDSF, the Taliban steamrolled throughout the country in only weeks while facing minimal resistance. Negotiated surrenders between the Taliban and local Afghan government officials ensured that the insurgents would have a clear path to Kabul. Two years ago, then U.S. President Trump proposed hosting Taliban leaders at Camp David, just days before the eighteenth anniversary of the attacks of September 11, 2001. This gesture, although never followed through, was one of many indications to the ANDSF that the U.S. would eventually pursue a negotiated settlement in Afghanistan and conclude its military presence, no matter the cost. U.S. Peace Envoy Zalmay Khalilzad relentlessly pushed the peace deal in Afghanistan and sought to assuage the concerns of those who believed that the Taliban were operating in bad faith. Many found Khalilzad’s repeated overtures disingenuous and repeatedly questioned rising levels of violence instead of the cease-fires that were supposed to accompany the proposed power-sharing arrangement.

Another obvious question is what the United States will do now that the Taliban is back in control of Afghanistan, raising concerns that they will likely provide refuge to transnational jihadist groups like al-Qaeda. In a briefing to a group of U.S. senators over the weekend, Chairman of the Joints Chiefs of Staff General Mark Milley noted that terrorist groups like al-Qaeda and the so-called Islamic State could reconstitute their networks in Afghanistan much sooner than many expected. The Biden administration appears caught off guard by the Taliban’s rapid gains in Afghanistan, unprepared for how swiftly the militant group captured major cities throughout the country. The result in Afghanistan is a multi-sector failure of policy, intelligence, capacity building efforts, and diplomacy. In remarks to the American people yesterday afternoon, President Biden suggested that preventing another terrorist attack on American soil was the United States’ overarching national interest related to Afghanistan. However, many analysts believe that the U.S. troop withdrawal and Taliban takeover of the country makes an attack significantly more likely.

The scale of the humanitarian disaster is difficult to quantify. In a statement over the weekend, President Biden declared, “Our hearts go out to the brave Afghan men and women who are now at risk.” Observers worry that carefully worded expressions of sympathy will bring little respite to a population under siege from violent extremists. Countless non-governmental organizations are currently looking for support and resources to assist the most vulnerable elements of Afghan society exposed to the Taliban’s rule, including women and religious and ethnic minorities. There are reportedly as many as 80,000 Afghans who could potentially qualify as Special Immigrant Visa holders or applicants, though it remains uncertain exactly how many Afghans will receive assistance from the U.S. government.

Since the beginning of this year, an estimated 330,000 Afghans have already been displaced, with civilian casualties rising. Concerns have only grown about a potential Afghan displacement crisis similar in scale to that of Syrian refugees in 2015-2016. Humanitarian access in Afghanistan had already worsened severely this year due to movement restrictions, violence, and threats against humanitarians; broader Taliban control bodes poorly for the capacity of aid groups to impartially and independently reach those in need of assistance. While Afghanistan has made significant progress in recent years on human rights and women’s empowerment, grave concerns are rising for human rights and security in the face of Taliban control, particularly for vocal activists. In an emergency meeting of the United Nations Security Council on Afghanistan on Monday, Secretary-General António Guterres cited “chilling reports” of human rights violations, particularly against Afghan women and girls. Now that the U.S. has failed in Afghanistan, there could be calls for the United Nations (UN) to put forth a plan. In September the United Nations Assistance Mission in Afghanistan (UNAMA) will be revisited. The UN could look for avenues to harness the existing sanctions regime to pressure the Taliban and use financing as a source of leverage to moderate the group’s behavior.

One common refrain from the Biden administration has been that it does not believe a U.S. presence in Afghanistan is in the national interest of the United States. Yet, it is difficult to see how the abrupt nature of the withdrawal, the poor manner in which the strategy was publicly communicated, and the disastrous results do not combine to significantly attenuate U.S. credibility across the world. While the Biden administration repeatedly touted a “responsible, deliberate and safe” U.S. withdrawal from Afghanistan, this assurance has decidedly been disproven. Repeated assurances from President Biden, even as the Taliban swept through Kandahar, Ghazni, Laghman, Logar, and Paktia provinces, served only to further undermine the Administration’s approach and showed it to be dangerously out of touch with events as they unfolded on the ground. Afghan civilians will now bear the brunt of the result of the hasty U.S. withdrawal and Afghan government collapse, and eyes are now turned to what will come of the international community’s response to endangered Afghan civilians, activists, and refugees.

Post Views: 84
Previous The Next Act in the Afghan Tragedy
Next The Impact of Defections from Boko Haram