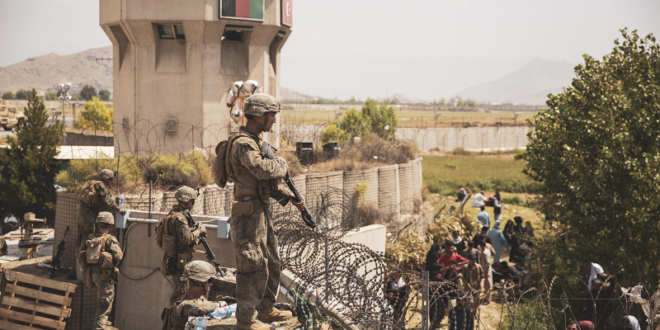 CIA Director Reportedly Met With Taliban Leadership – What Does This Mean?

Yesterday morning, a report emerged from The Washington Post that CIA Director William Burns met with Taliban leader Abdul Ghani Baradar in Kabul. This meeting reportedly happened on Monday, August 23. The Post article lists the source for this information as “U.S officials familiar with the matter who spoke on the condition of anonymity to discuss sensitive diplomacy.”

Yes, I would think this definitely qualifies as “sensitive” in nature. Everything about this situation in Afghanistan is sensitive. And a bit insane.

If this report is accurate, which it seems to be, this meeting is significant.

This Meeting Is ‘Interesting’ for Many Reasons

Therefore, it is all the more striking that the U.S. decided to send its top intelligence official, instead of a diplomatic representative, to meet with the Taliban.

According to The Washington Post, “The CIA declined to comment on the Taliban meeting, but the discussions likely involved an impending Aug. 31 deadline for the U.S. military to conclude its airlift of U.S. citizens and Afghan allies.” This was probably not the only topic of discussion.

This also means that open lines of communication with the Taliban have existed and still exist. Further, the meeting is significant because it means that U.S. officials were willing to send an extremely high-ranking member of the administration to meet with the Taliban on their turf. It means Burns flew into Kabul, had a meeting planned, and then went into hostile territory with all the risks this entails, with, certainly, guarantees of safe travel in and out.

It’s not hard to imagine the potential outcomes if the Taliban decided to capture CIA Director William Burns. The top intelligence official of the United States has just that — lots of intelligence. Meaning, the “juicy” kind of intelligence. While anyone would bank on the fact that the Taliban would not dare try to kidnap someone of his stature, it would be catastrophic if they did.

The Taliban already think they hold all the cards, and they also think they have defeated the United States. There is clearly a feeling of superiority and dominance. I would also wager that they are gambling on the U.S. not doing anything to risk extending this conflict. Would it be a stretch to say that the Taliban, other extremists, or foreign operatives would try to take advantage of the situation? No, it is certainly wouldn’t.

The meeting also means that the Taliban leadership has clear communication lines with the low-level Taliban fighters on the street. Clearly, a chain of command and effective lines of communication and authority exist. The U.S. was willing to gamble on that.

This is a huge risk, but it’s a risk the U.S. was clearly willing to take. Given that, the fact that President Biden chose to send the director of the CIA instead of the secretary of state is significant.

Another reality in all of this is that it’s very likely the Biden administration had no intention of this information getting out. It’s possible that The Washington Post story was a leak, rather than a deliberate conversation with journalists. With the controversial and intense nature of the situation, it’s likely that many people within the government do not agree with how this is playing out.

Another likelihood is that a meeting with intelligence officials is more of a “back-door” means to an end. This also could mean, the if the meeting indeed leaked it was done so deliberately.

It’s also notable that the Post is quoting “U.S. officials” plural — more than one. Not one official, not just one source. If that is the case, it is a message to everyone watching.

A State Department meeting with insurgents, who now claim power, is basically the same thing as official recognition. The Biden Administration should not, in any way, legitimize or recognize the Taliban as the legitimate government in Afghanistan. But someone has to talk with them and make deals or counter-demands. The CIA clearly has some kind of leverage, or again, that is the hope.

CIA Director Burns is probably the most experienced diplomat and negotiator available to the president. As the top spy, he also knows things and has information vital to both sides. The problem is, as events are playing out, this appears to not matter.

Over the last couple of days, it has become more likely that the U.S. will not be able to evacuate all Americans, Europeans, and Afghans, who need to leave, before the deadline of August 31. The Taliban have said that if the U.S. and U.K. try to extend that deadline, “…there would be consequences.”

In addition to the meeting between Director Burns and the Taliban, two more significant events happened yesterday. The first is that President Biden announced that the U.S. will stick to the August 31 deadline. The second is that the Taliban have said they will not allow any more Afghans to reach the airport in Kabul. No Afghans will be able to flee the country.

If the intention of the meeting was to buy more time for the U.S. and its allies, it seems to have failed. Or at least, there is no change. There seems to be no pushback against the Taliban. President Biden doubled down on the date, and the Taliban upped the ante. If that meeting had netted a result that was favorable to the U.S., it’s likely these two outcomes would have been different today.

For now, it seems the current status quo is being maintained.

A meeting in enemy territory also has another significant implication. It means top Taliban leadership knows exactly what is happening on the street. They claim to want to present a different “version” of the previous Taliban. However, the reality on the street is very different. People are being beaten, hunted house-to-house, and even executed. The reports and stories being shared daily are appalling. It has been suggested that the Taliban leadership already has a control problem. They are telling the world they want a more inclusive or tolerant government — this time around. But the emboldened rank-and-file Taliban are the same, or worse, than before.

The fact remains, however, that if the top Taliban leadership can communicate all the way down the chain and make sure that Taliban enforcers and fighters throughout the entire city — from the airport to the meeting place — can guarantee safe passage for one of the most high-value targets in the world, they could also stop the violence and atrocities happening on the streets.

But they just don’t want to.