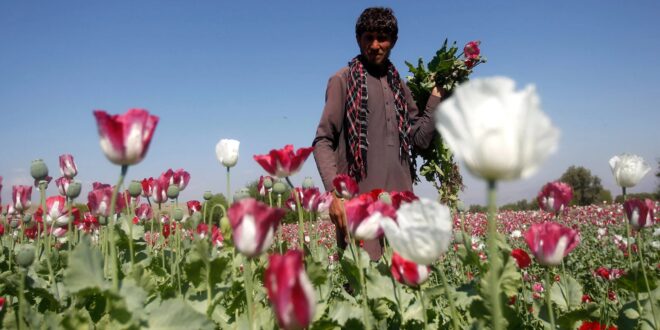 Afghanistan’s Coming Economic Collapse — and What It Could Mean

Not even heroin, opium, and methamphetamine will be able to solve the problem.

No government — particularly one with only a shaky claim to legitimacy, none of it democratic — will ever enjoy a sudden drop in its country’s standard of living. That is something the Taliban may shortly discover as they try to consolidate their hold over a society famously fragmented along ethnic lines. Terror reinforced by purloined American weaponry may work, at least for a while. And yes, the universalist pretensions of the Taliban’s Islamism will win over some hearts and minds, as will the order, however harsh, that their form of Sharia brings with it. Nevertheless, if the Taliban, a movement still strongest in its Pashtun heartland, come into too abrasive a conflict with the traditional loyalties of other Afghans to their kith, kin, and tribe, they may struggle.

Now throw in the rural–urban divide as another potential stumbling block for the Taliban in certain places — notably greater Kabul, an urban agglomeration that is home to over 4 million people, up from 2.5 million when the Taliban were driven out of power in 2001. That said, Kabul may, culturally, be less “urban” than those millions suggest. Many only moved there — often from the countryside — fairly recently (or are the children of such arrivals). Meanwhile, only 25 percent of Kabul’s population is Pashtun, and a large percentage of the city’s inhabitants (Afghanistan’s population skews very young) spent their formative years in the freer atmosphere that developed after the Taliban had been routed. Many will be too young to make a difference (41 percent of Afghans are 14 and under), and young enough to be reprogrammed. But there are plenty, too, in their late teens and twenties, who will remember what life was like before August 15.

That is not to say that the now-lost era was a paradise. It was anything but. As the Financial Times’s Martin Sandbu, in a critical account of the decades after the Taliban’s no-longer-final defeat, explained, corruption flourished — an affront, incidentally, often cited by those prepared to go along with the Taliban’s return. That corruption, naturally, will be back before long, albeit paid into different, pious hands. Demonstratively ascetic totalitarian regimes are like that.

Since 2012, GDP per capita has stagnated at around $600 — a dismal number, even if adjusted for purchasing power. It did, however, more than double in the ten years before that. The failure to maintain that growth will have inflicted immense political damage: disappointed expectations can be far more dangerous than unchanging poverty.

It would have been astonishing if personal income had been evenly distributed throughout Afghanistan’s different regions: The cities — especially, Kabul, I imagine — are likely to have fared quite a bit better, meaning that if the economy implodes under the Taliban the pain, if only relatively, will be felt more sharply there. That pain may be more muted for the around 74 percent of Afghans still based in the countryside. Presumably they have less to lose; although, if food supplies start to fall below a certain level, those in the cities — who will probably be closer to sources of humanitarian relief — may find themselves better placed to cope than those in the hinterland, or at least those in the hinterland who are not self-sufficient.

Income distribution does not, however, tell the full story.

It is not only city-dwellers who will suffer if the advances of the last 20 years go into reverse.

In an earlier article on the economy that the Taliban will be taking over — and its likely prospects (bad) — I highlighted the difficulties that the Taliban will face in gaining access to Afghanistan’s hard-currency reserves of around $9 billion. Remember, these are difficulties that will be compounded by the fact that Western assistance, a critical element in the country’s rickety finances, will dry up. As I noted in that article, on August 18, Ajmal Ahmady, the now-former governor of the Afghanistan’s central bank (he has prudently decamped abroad) projected this as his base case:

That seems all too plausible.

Ahmady has now been replaced by Mohammad Idris, who headed the Taliban’s economic commission.

With no cash at hand — and aid no longer flowing in — can the country pay for what it needs out of the money it makes from exports? In a word, no, and not even heroin, opium, and methamphetamine can fill the gap.

Writing in the Financial Times on Tuesday, Ajmal Ahmady:

A major crunch is coming very soon. There are any many more people to look after than the last time the Taliban was running the country. Then the population stood at a little under 21 million. Now it is over 39 million.

As I mentioned in my earlier article:

Even if help does arrive it may come too late to allow the Taliban to avoid serious trouble. That’s one reason why they will be eyeing those $9 billion in reserves as a quick way of heading off such problems for now.

And it won’t have escaped their notice that one of the most valuable bargaining chips that they currently hold are those thousands of Westerners — not to speak of the Afghans who have helped the NATO effort over the years. They are trapped in different locations all over Afghanistan with fewer and fewer options of getting out as every day goes by.