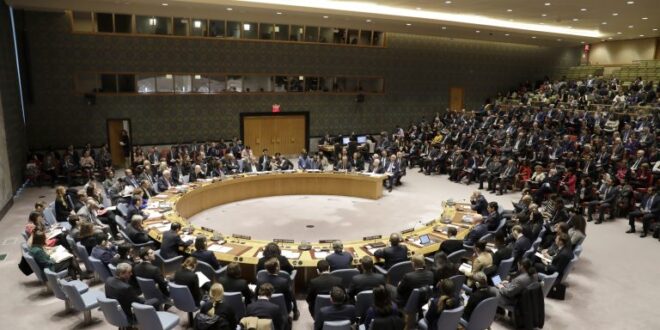 Davood Moradian, Director General of the Afghan Institute for Strategic Studies, briefed the UNSC and accused the Islamic world of being passive observers.

The UN Secretary-General’s report highlighted the growing terrorist threat in Africa and the importance of countering the financing of terrorist groups.

Against the background of the crisis in Afghanistan, the UNSC meeting did little to directly address ways the UN might play an active role in addressing the evolving terrorist threat in the country.

The United Nations Security Council met last week to discuss the Secretary-General’s report on the threat posed by ISIL/Da’esh (the official terminology for the group used by the UN). The report is the thirteenth in a series of regular assessments mandated by the Council, which began in 2016 when ISIL was at the peak of its influence and states sought regular updates on the group’s threat and UN activities needed to address it. Since then, twice a year, the report forms the basis for a routine UN discussion on counterterrorism activities; only twice have states taken the opportunity to invite a civil society briefer to share their perspectives on the threat posed by ISIL. Once, the United Kingdom invited terrorism expert Joana Cook to brief the Council on the roles of ISIL-affiliated women, and last week, Davood Moradian, Director General of the Afghan Institute of Strategic Studies, briefed the Council on the unfolding situation in Afghanistan. Having left Kabul airport only 48 hours before the session, Mr. Moradian said the world had witnessed a collective failure in addressing terrorism in the two decades since the attacks of September 11, 2001, and that the Islamic world had failed to own its share of the responsibility, even though many of the victims have been Muslims. The intellectual and political stagnation of institutions, including religious, cultural and educational ones, contributed immensely to the rise of extremism, he said.

The most drastic development in terrorism over the past few months has been the expansion of ISIL in Africa, notes the most recent report of the Secretary-General on the threat posed by ISIL/Da’esh. Noting the spillover from Mali into Burkina Faso and Niger, the report calls the deterioration of the security situation in Mozambique “one of the most troubling events of 2021.” The report also focuses on the finances of terrorist groups, estimating that ISIL has approximately $25-$50 million in financial reserves and highlights concerns about the increased use of cryptocurrencies by terrorists.

While the Secretary-General’s report and the Security Council meeting were scheduled long before the unfolding crisis in Afghanistan, several Security Council members took the opportunity to reflect on the current situation. Russia stressed that it would only work with political forces that have no ties to terrorists, holding up the example of their cooperation with the Syrian regime, which will give little comfort to many observers. China stressed the importance of preventive engagement, highlighting the importance of eliminating “root causes” and stressing long-term solutions including youth education, employment, vocational training, and “community correction measures.” Beijing has used these types of statements in attempts to legitimize measures China has taken in Xinjiang, including placing nearly a million Uighurs in detention camps and appropriating counterterrorism rhetoric to justify repressive measures. While several Council members, including the United States, stressed the importance of targeting terrorism finances, Kenya’s Ambassador once again highlighted that Al-Shabab is not listed on the UN’s terrorism sanctions list (“1267”), despite its affiliation with al-Qaeda. This is in large part owing to U.S. and European concerns regarding the impact of such a listing on the delivery of humanitarian assistance in Somalia, though no other terrorist group has garnered a similar exemption.

The Security Council took the unusual step of issuing a Press Statement following this meeting, reflecting members’ concerns about the increased terrorist threat in Afghanistan and Africa, and reaffirming India’s longstanding call for the adoption of a UN Convention on Terrorism that would represent a unified understanding of the threat and response. “Let us always remember that what is true of COVID is even more true of terrorism—none of us are safe until all of us are safe,” Indian External Affairs Minister Subrahmanyam Jaishankar, told the Council. However, for UN staff, civilians in Kabul, and observers around the world, the meeting will have offered little hope of concrete action from the Council on addressing the rapidly evolving threat in Afghanistan, where reports already abound of a heightened threat by the Islamic State–Khorasan Province, and of al-Qaeda regrouping once again in safe havens provided by the Taliban. There was no indication of tasking to UN entities like the UN Office of Counterterrorism, the Counter-Terrorism Executive Directorate, or the UN Office of Drugs and Crime to deliver updated assessments or analyses, and recommendations or support for tangible actions in light of the threat. Moreover, there are disturbing reports of the UN prioritizing the evacuation of international staff and leaving its national employees in Afghanistan with no protection or support. Several international staff members and the UN staff union have reportedly raised this issue with UN leadership stressing the need for UN agencies and field offices to ensure the safety of all staff regardless of nationality.

There have also been questions about the possibility of a UN peacekeeping operation in Afghanistan but under current circumstances, it appears highly unlikely that the conditions required for such a mission would be met, including support from the potential host government. Moreover, even if that were to be the case, the timing required to set up such a mission would far exceed the August 31 deadline repeatedly given by the Taliban for foreign troops to remain in Afghanistan. However, with negotiations expected soon regarding the renewal of the mandate for the UN Assistance Mission in Afghanistan (UNAMA), there will be interesting and important opportunities to ensure that the mission is mandated and resourced to address needs and threats in the current environment.