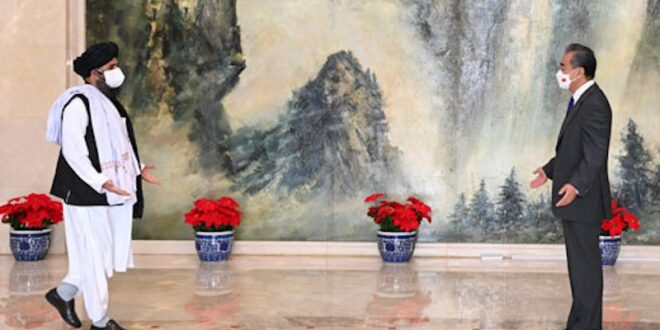 Chinese Diplomacy And The Taliban In Afghanistan – Analysis

It is becoming increasingly obvious what kind of superpower China might be. Even as the international community watches the unfolding events in Afghanistan with concern, China has moved quickly to further its interests in the region. For Beijing, it is business as usual.

Beijing has been quick to announce that it would deepen its “friendly and cooperative” relations with Afghanistan after the seizing of power by the Taliban. In a Chinese Foreign Ministry media briefing, spokesperson Hua Chunying said that China hoped that the Taliban would honour its commitment to an “open and inclusive” Islamic government, and the transition of power would happen without violence. In fact, China hosted a Taliban delegation in July 2021, well before the Kabul takeover. Beijing expressed its respect for the Afghans’ right to decide their future, which suggests that it may view the current events as an expression of the people’s will.

Right now, China is one of few countries maintaining an active embassy in Kabul. On 24 August, the Chinese Ambassador to Afghanistan, Wang Yu, met the deputy head of the Taliban political office and clearly indicated his country’s intention to work with the Taliban. The Taliban’s relationship with Pakistan could also work to China’s favour. Through a trilateral partnership, China could extend its Belt Road Initiative (BRI) including the China-Pakistan Economic Corridor (CPEC) up to Afghanistan.

Another motivator driving China’s engagement with the Taliban is to minimise the possibility of terror-related networks gaining a foothold among the Uyghur Muslim population in Xinjiang province. For the same reason, China has conveyed to the Taliban that it must not provide any moral or material support to the Uyghurs. Beijing is also concerned about the Taliban’s ties with the East Turkestan Islamic Movement (ETIM), which, as per China, poses a direct threat to its national security and territorial integrity. Chinese Foreign Minister Wang discussed this with the head of the Afghan Taliban Political Commission, Mullah Abdul Ghani Bardar, in Tianjin on 28 July. He said that ETIM is an international terrorist organisation, and China expects that the Taliban would sever its ties with them and other terrorist organisations.

China must however be aware that drug trafficking, Islamic fundamentalism, and terrorism have so far been intrinsic to the Taliban’s existence. These issues are hard to limit to one country. They are transnational by nature, and if not being fought collectively over time, they become more networked and spread further. Even if we assume that these factors won’t reach China, they are still likely to have a destabilising regional impact. The strategy of extracting economic benefit while neglecting the Taliban’s destructive role could be very short-sighted on China’s part. Dynamic economic exchanges demand peace, stability, and the rule of law—none of which are expected under a Taliban-ruled Afghanistan.

Most importantly, as China seeks to replace the US as the prime mover in Afghanistan, it must also acknowledge that offering alternative ideas, institutions, and processes is more critical than a myopic self-centredness in pursuit of national interests. The approach being demonstrated by China in the ongoing Afghanistan crisis would make most countries of the region more distrustful of Beijing, and not the other way round. In the long-term, unprincipled, self-centred diplomacy will ultimately be destructive not just for regional peace but also for China’s own self-interests.

The US-led intervention in Afghanistan over the past two decades was undoubtedly insufficient intent to rebuild a modern Afghan society in Afghanistan. There is enough evidence of corruption and contradictions in their conduct on the ground. The way the US decided to withdraw and the manner in which the process unravelled raises many questions about its leadership. Unlike China though, the US-led attempt, however weak, had the stated goals of establishing rule of law, democracy, and human rights in the country. China on the other hand appears to not be bothered by such goals. A rising power such as China not making any mention of these issues speaks volumes about the nature of their leadership in the region.