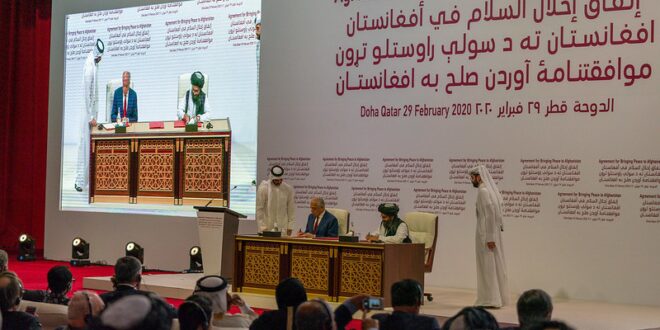 During the period of Taliban rule between 1996-2001, Qatar, like the three countries of Saudi Arabia, the UAE and Pakistan, did not recognize the regime, though it had extensive interactions with it, so much so that in 2013, with the permission of the United States, it opened the Taliban’s political office in Doha.

Qatar was thus able to be at the center of negotiations with the Taliban because it was able to establish good and neutral relations with all parties. Moreover, despite the fact that the February 2020 peace agreement was never realized, Qatar still stands to gain from the new status quo. How did Qatar become a major beneficiary of the Taliban expansion in Afghanistan, and what are Qatar’s future opportunities and challenges in Afghanistan?
Why was Qatar chosen?

Qatar has become a diplomatic arbiter and peace broker in recent years, thanks to its rich oil and gas wealth and willingness to play neutral broker in various political conflicts. Qatar has so far mediated many disputes in the Arab world. These include ending an 18-month political dispute between rival factions in Lebanon in 2008, mediation between Fatah and Hamas in 2012, and resolving the Sudan-Eritrea dispute in 2011. Following the same mediation policy, Qatar sought to facilitate the Afghanistan political peace process between the Taliban and US, opening the Taliban political office in Doha in 2013.

The Taliban’s political office in Doha opened with a green light from the United States. In 2008-2009, NATO and the US sought to reach out to Taliban representatives. In 2010, after spending a year finding a real representative of the Taliban, they identified Mullah Akhtar Mohammad Mansour, who they thought was a top Taliban commander. The officials met with him four times at the presidential palace in Kabul and paid him large sums of money, but it was later revealed that he was not a high-ranking Taliban leader. He took the money and disappeared. By 2013, the Americans realized that if they were going to negotiate with the Taliban, they needed to know who they were talking to. They had come to the conclusion that the Taliban should have an address with which they could easily communicate.

Turkey, the UAE, and Saudi Arabia were eager to host the Taliban on their soil. Turkey was rejected due to NATO membership, and the UAE and Saudi Arabia were considered too close to the Americans. Qatar was deemed neutral enough for both sides. The Taliban chose Doha because of the neutrality of the Qataris and the lack of involvement of Qatari officials in imposing their will on the Taliban.

In 2011, the UAE competed aggressively with Qatar for the right to host a Taliban office in Abu Dhabi. According to a leaked email, at the time, the UAE Ambassador to the United States Yousef al-Otaiba expressed regret to US officials for not helping Abu Dhabi to represent the Taliban’s political office. The UAE believed that diplomacy with the Taliban was the most effective way to moderate the extremist policies of this Sunni fanatic group. So, it endeavored to connect with the Taliban and compete with Doha. Even as early as the spring of 2000, the UAE established diplomatic relations with Mullah Mohammad Omar, the founder of the Taliban, to persuade him to hand over Osama bin Laden to the United States. Mullah Omar agreed to a meeting between the Taliban’s intelligence chief and the US consul general in Karachi, which ultimately failed.

Saudi Arabia and the UAE made many efforts to participate in the peace of Afghanistan and overtake Qatar, but the Taliban did not accept their neutrality and ignored them. The UAE and Saudis, in exchange for interacting with the Taliban and granting them diplomatic asylum, demanded that the Taliban accept the legitimacy of the Afghan constitution, avoid political violence, and condemn al-Qaeda, which the Taliban refused. In comparison, Qatar offered an unrestricted diplomatic forum to the Taliban, which they unsurprisingly favored.
Qatar and the future of Afghanistan

Qatar helped the Taliban free its key leaders from Guantanamo Bay detention camp, remove its commanders from the Western blacklist, and exchange their prisoners with prisoners of the government of Afghanistan. The Taliban will not forget the favor of the Qataris and will reward them. Qataris are thinking about their influence in Central Asia. Afghanistan is seen as a bridge to expand Qatar’s financial, economic and ideological influence in Central Asia. In Central Asia, Qatar began building magnificent mosques via mosque diplomacy, and expanded economic cooperation and investment in the oil, gas, mining, banking, agriculture industries, and even education and culture cooperation with Tajikistan, Kazakhstan, and Turkmenistan.

Qatar is trying to become an integral part of Afghan politics under Taliban rule, primarily through investment and financial assistance and participation in reconstruction. The Taliban need money to stay in power. Da Afghanistan Bank, the central bank of the country, had around $9.5 billion in assets frozen by the United States, including cash shipments, which the Taliban can no longer access. In addition, international organizations such as the European Union have cut off financial aid to Afghanistan, making it conditional on the Taliban respecting human rights. In this situation, the Taliban are increasingly dependent on Qatari financial aid.

Other Gulf states, such as Saudi Arabia and the UAE, are likely to invest in Afghanistan to compete with Qatar, but make their funding conditional on the Taliban pursuing specific policies. It will take a long time for them to invest in Afghanistan and negotiate with the Taliban, but Qatar is interacting with them thanks to eight years of Taliban asylum, requiring less coordination. Thus, Qatar is a few steps ahead of other rich Gulf states in terms of the Taliban’s financial dependence on Qatar’s budget resources.
Limits of Qatar’s influence

Qatar is not alone in Afghanistan and will face restrictions from competitors. Iran is one of the countries that established its relations with the Taliban years ago. Unlike Qatar, which has been interacting with Afghanistan and its official government through the US perspective, In the past decades, Iran has devoted itself to interacting directly with Afghanistan’s diverse ethnicities. Iran thus remains well-positioned to gain a stronger role in Afghanistan due to past efforts to build ties with all segments of Afghani society, including religious leadership and government. This penetration may produce conflict with Qatar and other Gulf countries.

History has shown that the Gulf states, in addition to investing in post-war countries, are equally likely to intervene in post-conflict developing states. This has been witnessed both in the Persian Gulf region (such as in Iraq and Yemen) and outside the region (such as Libya and Syria). It follows that a major expansion of Iranian influence in Afghanistan could trigger a proxy war between various countries in the region.

Perpetuating Qatari activities in Afghanistan is a function of the assessment of the US government regarding the existential nature of the Taliban in Afghanistan. The United States vowed to isolate Taliban if they took power by force, which is precisely what happened. If US does not recognize the Taliban government, the diplomatic situation will become very difficult for Qatar. Doha follows US policy in this regard, but it should be understood that Qatar will not endanger its role as mediator. Qatar will surely remain at the center of all conversations, because there isn’t any viable alternative.

The Taliban represents Qatar’s political capital in Afghanistan, nurtured by both support of Islamist groups in Qatar’s foreign policy and eight years of experience hosting and indirectly influencing them. As a result, over the next few years, Qatar will spend this accumulated political capital in an attempt to moderate the more radical groups in Afghanistan and facilitate their integration into the state-building process and intra-Afghan negotiations, all to the ultimate benefit of the new regime’s legitimacy on the world stage.