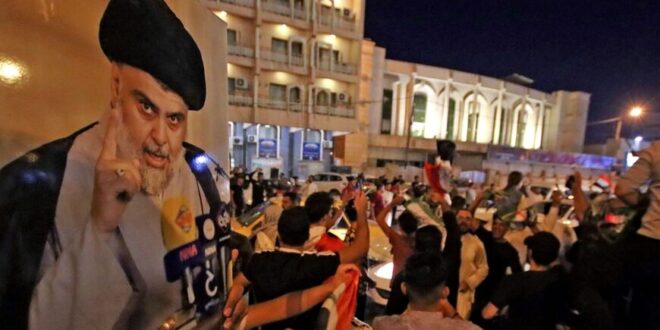 The UN is trying to help form the next government, following the deadlock among Iraqi political leaders. The Oct. 10 elections led to a remarkable victory for Sadr with 72 seats, which pushed Fatah block (affiliated with the Popular Mobilization Units) to form an alliance with Nouri Maliki’s State of Law. The two groups together have 59 seats.

Now, the Shiite political scene is divided into two main groups: Sadrists and the alliance between PMU and Maliki, which is called the Coordination Framework.

On Nov. 30, the Independent High Electoral Commission announced the final results of the legislative elections, showing the loss of the political parties allied with Iraq’s Shiite factions.

A few hours later, the Shiite Coordination Framework, which includes armed parties and factions, declared its rejection of the results. Meanwhile, Sadr confirmed that the elections were “fair,” calling on the “losing” parties not to allow the results to be the end of democracy in Iraq.

Shiite factions known for being close to Iran have been demonstrating for over a month now, denouncing the election results and threatening the government of Prime Minister Mustafa al-Khadimi, accusing it of “election fraud.”

On Dec.2, Sadrist movement leaders met with the leaders of the Coordination Framework, including the leader of Asaib Ahl al-Haq faction, Qais Khazali; the head of State of Law Coalition, Nuri al-Maliki; and the head of Fatah bloc, Hadi Ameri. The meeting was a bid to break the deadlock between the two sides.

The head of the Iraqi Consultative Council, Farhad Alaeddin, told Al-Monitor, “Sadr is looking for a political solution that would lead to the cabinet formation [where] those opposing the election’s results might get a greater share of power in next cabinet in a way that satisfies them.”

“Sadr will, at a later stage, discuss with them the naming of the prime minister, and may agree with them that choice of premier would be done in agreement with them,” he added.

Rahmah al-Jubouri, a former senior researcher at the National Endowment for Democracy in Washington, said, “The Shiite Coordination Framework may have accepted the election results,” but they want a cabinet similar to previous ones rather than a Sadr-controlled government.

“Should Sadr takes control of the government and the state in general, he will likely face a dangerous confrontation with the armed factions — something that he does not want,” he added.

Sadr does not wish to miss this opportunity, but at the same time he is not willing to comply with all of the Shiite Coordination Framework’s demands, which is why he is carefully trying to win the opposing parties over.

Observers believe that the factions affiliated with Iran are likely to escalate against the United States’ interests in Iraq. However, they believe that the real intention is to make gains in the upcoming government.

Informal discussions between Sadr and the Shiite Coordination Framework have yet to reveal any agreement on cabinet formation. But according to information obtained by Al-Monitor, “parties close to Iran will not be affected much in the next government formation, that is, they will not lose their influence in the executive branch.”

Sources who spoke to Al-Monitor said, “The parties are not as interested in the election results or the name of the new prime minister, as much as they are in preserving their power in the coming cabinet. They spoke of ‘threatening the communal peace.’”

Sadr is trying to take advantage of the differences within the Shiite Coordination Framework in a bid to form his own cabinet, which is what Iran’s allies fear.

Ihsan al-Shammari, head of the Iraqi Centre for Political Thought, told Al-Monitor, “Sadr is seeking to secure the half plus one of the cabinet quorum in order to pass the laws he wants. Meanwhile, the Shiite Coordination Framework, especially Nouri al-Maliki, do not want that, which means that there won’t be full agreement on the cabinet formation.”

Shammari continued, “Sadr’s meeting with the factions’ heads came to alleviate the tension, but this does not suggest there has been a final agreement on everything.”

Sadr is seeking “consensus’ with major forces within the Shiite Coordination Framework, such as the State of Law; the National Wisdom Movement led by Ammar Hakim (who will not be part of the next cabinet according to information to Al-Monitor); as well as the Fatah Alliance, led by Hadi al-Amiri, the Ataa Movement led by Faleh al-Fayyad, and the Islamic Virture Party led by cleric Muhammad al-Yaqoubi.

Sadr, however, does not appear to be interested in an agreement with the Hezbollah Brigades, or other armed groups that rejected the election results, which suggests that he is seeking a rapprochement with parties with political rather than armed influence, to form a cabinet and defuse the political tension. This seems particularly true even if the armed factions escalate military action against diplomatic missions or US military bases.

According to sources within the Shiite Coordination Framework who spoke to Al-Monitor on condition of anonymity, “The framework somewhat accepted the election results, but does not wish to give up the gains it had made in previous governments.”

“The Shiite Coordination Framework wants to keep heading the same parliamentary committees as it previously did, even if its number of seats does not qualify for this. It is seeking the same thing in the executive branch,” the sources added.

It appears that tension between Sadr and the armed factions is likely to persist, but it is unlikely that things would degenerate into a full-on clash.

Post Views: 35
Previous Iran’s chief negotiator says burden is on West, not Iran, for next move in nuclear talks
Next Turkey strikes Yazidi militia in Iraq