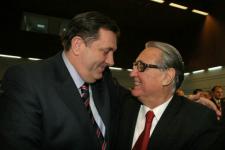 Top Bosnian Serb political parties have snubbed an ultimatum issued by the country’s top western envoy, High Representative Valentin Inzko, inviting him instead to address the Bosnian Serb Assembly to explain his demands.

The move is seen as a further unfortunate but expected escalation of relations between the Bosnian Serb political leadership and western powers, following on stronger US engagement in the Balkan region, western officials told Balkan Insight on Thursday.

Local media speculated that this clash could persuade the Office of the High representative, OHR, to once again use its broad governing powers to either abolish the disputed declaration, or even to punish and sack certain Bosnian Serb politicians.

A “new war” between Bosnian Serb leaders and the west was initiated after High Representative Inzko last week gave Republika Srpska Assembly a June 11 deadline to abolish its May 14 declaration. The declaration calls for the OHR to halt the use of its sweeping governing powers and reverse all previous decisions. It also demands a recall of all competencies which have been transferred from entity to the state level on orders of the OHR.

Claiming that this declaration challenges OHR authority and violates Bosnia’s constitution, Inzko marched into his first open conflict with the Bosnian Serb leadership since assuming the post in late March this year.

They all stressed that the May 14 declaration was in no way in violation of Bosnian laws or the constitution. At the meeting, they also adopted a joint position rejecting Inzko’s ultimatum but also to inviting him to further explain his position and demands.

After the meeting, the Assembly Speaker Radojicic said that all six parties had unilaterally agreed to send an invitation to High Representative Inzko to meet all top Bosnian Serb leaders in order to “resolve misunderstandings” and then address the entity’s Assembly. It remains unclear whether Inzko will accept the invitation.

The staunchest and most radical Bosnian Serb leader, Prime Minister Dodik, went even further, telling local media that he had already demonstrated in the past that he is “not afraid of Bonn powers.”

“I would not advise Mr Inzko to try to impose his force like many other High Representatives,” Dodik told media.

Inzko’s predecessor, Slovak diplomat Miroslav Lajcak, had also tried to threaten Bosnian Serb leaders with sanctions, but they saw through his bluff as he lacked international support to back his efforts. Lajcak and the OHR have not fully recovered from this episode.

Western diplomats and analysts, speaking on condition of anonymity, told Balkan Insight that the hardening of Inzko’s position may be a direct result of the US’ recent re-engagement in the troubled region.

They also see OHR’s sudden policy shift as somewhat of a surprise in light of some opinions that the Republika Srpska Assembly’s May 14 declaration was not legally binding and as such was seen as yet another Bosnian Serbs “hot air ballon,” mainly intended for internal media consumption.

Western officials said it remained unclear whether there was any western master plan hiding behind Inzko’s ultimatum. Analysts warned that engaging in a new clash with Dodik, without a clear strategy and secured backing, could spell the end of the game for the flailing international presence in Bosnia.