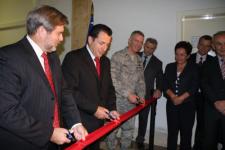 A modern defence operations centre has been opened in Sarajevo, thanks to the US provision of $5 million in funding. Local media reports that the facility will function as a military command and control centre and can also be utilised in the event of natural disasters.

The opening of the centre is seen as a significant step in Bosnia’s effort to gain NATO membership.

“Now we can have direct communication with NATO centres all over the world,” Bosnian Defense Minister Selmo Cikotic said during the opening ceremony in Sarajevo on Wednesday.

“From here we can communicate with planes, ships and ground troops. We can reach any corner of the planet,” Cikotic added.

The US ambassador to Bosnia, Charles English, and the commander of the American NATO command in Europe, Brigadier General David Cotton, who officially opened the centre alongside Cikotic, said they were impressed with what they saw.

Bosnia’s new command and control centre will have its first operational test during NATO’s Joint Endeavor 2009 military exercise, which will take place near the Bosnian town of Banja Luka from September 4-17, officials said.

During the opening ceremony, Cikotic told the media that eight more Bosnian officers will be sent to Afghanistan next month. Two Bosnian officers have been serving in Afghanistan for the last four months. Their deployment is also seen as significant in paving the way for Bosnia’s integration into NATO.

Bosnia joined NATO’s Partnership for Peace program in December 2006 and is currently developing an Individual Partnership Action Plan (IPAP) to further promote cooperation with the alliance. In April 2008, Bosnia was invited to begin an Intensified Dialogue with NATO on its membership aspirations and related reforms.