US Worried about Bosnian Political Rifts 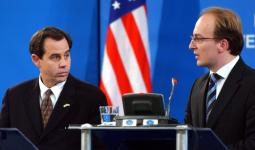 The US is concerned about the current situation in Bosnia and its leaders’ commitment to securing EU and NATO membership, US Deputy Assistant Secretary of State Stuart E. Jones said.

“The American government is concerned because we haven’t seen practical actions which reflect [Bosnian officials’] commitment to Euro-Atlantic integration,” Jones was quoted by the media as saying.

Jones and Zoltan Martinusz, the director of the EU Council Secretariat for the Western Balkans, Eastern Europe and Central Asia, started a joint two-day visit to the country on Wednesday.

Bosnia’s three-year political crisis escalated last week. The diplomatic visit reflects growing concern in the US and in EU states that the crisis may once again put the country’s constitutional and territorial integrity in question.

“After 14 years of intense international efforts to stabilise and rebuild Bosnia, the country now stands on the brink of collapse. For the first time since November 1995 – when the Dayton Accord ended three and a half years of bloody ethnic strife – Bosnians are once again talking about the potential for war,” Council on Foreign Relations, CFR, analysts warned in a recent article.

Jones and Martinusz’s visit comes only a week after the publication of the CFR article and follows a series of high-level meetings and conferences that have focused on the new crisis in the Balkans.

The diplomats expressed their concerns regarding the current poltiical imbroglio following a meeting with Bosnian Serb state and entity officials and opposition leaders in Banja Luka on Wednesday. They are holding a round of meetings with Bosniak (Bosnian Muslim) and Croat leaders in Sarajevo on Thursday.

After Wednesday’s meeting, Republika Srpska Premier Milorad Dodik, told reporters that a key condition for the country to move towards EU membership is the closure of the Office of the High Representative, OHR.

Dodik, who is widely seen as one of the main culprits in the radicalisation of Bosnia’s political scene since 2006, accused other politicians of deliberately maintaining the current crisis in order to keep the OHR in Bosnia indefinitely.

Although the OHR was supposed to be closed by 2007, it has remained open due to the worsening political environment.

Asked whether there were any indications of international pressure being brought to bear during Wednesday’s meeting, Dodik stressed that any international moves to build pressure would be futile and counterproductive.