“Changes in Bosnia only by consensus” 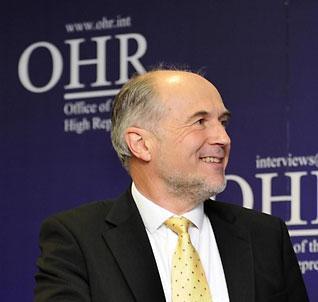 EU High Representative Valentine Inzko says changes to the Bosnian Constitution are impossible without the consensus of all three constitutive peoples.

The procedure of Constitutional change is not possible without the consensus of the representatives of all three peoples. Anything else is just pre-election talk.

“It is about time politicians stopped thinking only about the elections. The matter needs to be looked into deeper and wider,” Inzko told daily Politika.

“The success of the process doesn’t only mean a more functional state, but also that Bosnia-Herzegovina will make a step towards the EU… I’m convinced that it is the desire of the majority of citizens of Bosnia-Herzegovina…,” he said.

The high representative said that it was good news for him that Bosnian political leaders at the Butmir negotiations had agreed to continue the dialogue. He added that the important outcome of the Butmir meeting was the fact that there was a consensus on Bosnia-Herzegovina’s future association with the EU.

“It’s clear to everybody that membership in the EU and NATO is the only safe road towards a future of prosperity. The presence of senior U.S. and EU representatives in these negotiations shows the unity of the international community when it comes to supporting Bosnia-Herzegovina and its efforts to move forward to Euro-Atlantic integration,” Inzko said and added that the Butmir negotiations “are the highest-level meeting dedicated to Bosnia-Herzegovina after Dayton”.

He stated that the political will to find a compromise was key to addressing issues in Bosnia-Herzegovina and said that those who favored agreements and compromise should receive support in the next elections.

“The citizens of Bosnia-Herzegovina should use their power and say what they think of the politicians in the next elections. A fear of losing their position is the only thing that motivates the vast majority of politicians. This is where the citizens have the Bonn Powers. They too can and have to change things,” said the high representative.

Talking about the disagreement between the representatives of the Republic of Srpska and the Federation, Inzko said he “won’t comment on individual requests and proposals”.

“Everybody is asking for something. However, they can only carry out their ideas through dialogue”.