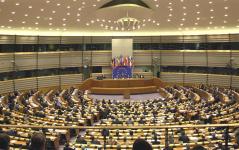 Reaffirming its commitment to enlargement, the European Parliament’s Foreign Affairs Committee has called for the immediate implementation of an interim trade agreement between Serbia and the EU.

“The (EU) Council should ratify the Interim Agreement without delay,” says a draft resolution of the Foreign Affairs Committee, citing the fact that Belgrade has unilaterally implemented the agreement as proof of Serbia’s commitment to EU accession.

A parliamentary resolution on the European Commission’s 2009 enlargement strategy for the Western Balkans, Iceland and Turkey, drafted by a member of parliament Gabriele Albertini will be debated at a plenary session on 26 November.

The resolution calls current and potential EU candidate countries to continue reforming in orer to stay on track for eventual EU membership. It also calls enlargement one of the most successful of all EU policies.

Members of the European Parliament welcomed Serbia’s additional progress in co-operating with the UN’s War Crimes Tribunal, but regretted Serbia’s decision to call on Kosovo’s Serbs to boycott the mid-November local elections.

They appealed to Serbia to step up its co-operation with the EU’s rule of law mission, EULEX, “especially in northern Kosovo”.

Members of parliament, MEPs, welcomed the Commission’s intention to strengthen relations with Kosovo, including exploring the possibility of Kosovo’s participation in Community programmes. “The process of decentralisation should be concluded before the end of the year in line with the Ahtisaari Plan,” it says.

They also welcomed the hitherto unprecedented high turnout of Kosovo Serbs, which they see as an encouraging indication that the Kosovo’s Serb community is willing to acknowledge its responsibilities.

Turning to Bosnia and Herzegovina, MEP’s expressed their dissatisfaction with the overall limited progress achieved. “The country’s unstable political climate and the lack of a common vision shared by the Muslim-Croat Federation and the Serb Republic (Republika Srpska) is a concern,” the draft paper says.

Parliamentarians recognised the progress made by Albania and Montenegro since the last progress reports and encouraged both countries to continue their reform efforts. “Parliament welcomes last week’s EU foreign ministers’ decision to invite the Commission to prepare its opinion on the country’s application,” the paper says.

The Parliament also asked the Council to confirm the Commission’s recommendation to open accession negotiations with Macedonia and to set a date for the start of negotiations at the December summit.

On Croatia, parliamentarians thought the country may conclude accession negotiations by mid 2010, but asked officials on Zagreb to “steps up their efforts and fulfill all the necessary criteria and benchmarks, including full co-operation with ICTY”.