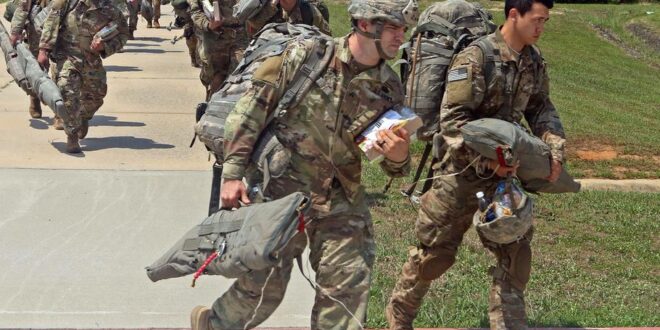 Another 3,000 U.S. troops to deploy to Poland as White House says Russia could invade Ukraine within the week

An additional 3,000 troops from the 82nd Airborne Division at Fort Bragg, N.C., were ordered to Poland as a Russian invasion of Ukraine could launch in the coming days before the end of the Winter Olympics, senior defense officials said Friday.

The troops are part of the 82nd Airborne’s infantry brigade combat team, which last week deployed 1,700 soldiers to Poland to assist the NATO ally that borders Ukraine to the west. The troops are expected to join the other 82nd soldiers “by early next week,” said the official, who spoke on condition of anonymity.

On Saturday, chief Pentagon spokesman John Kirby said the U.S. will be repositioning 160 members of the Florida National Guard who have been deployed to Ukraine since late November. The troops from the 53rd Infantry Brigade Combat Team will move to another European nation. They have been advising and mentoring Ukrainian forces as part of Joint Multinational Training Group-Ukraine.

Last week, the U.S. sent 300 soldiers from other elements of the 18th Airborne Corps at Fort Bragg to set up a joint task force headquarters in Germany.

“All told, these 5,000 additional personnel comprise a highly mobile and flexible force, capable of multiple missions,” the official said. “They are being deployed to reassure our NATO allies, deter any potential aggression against NATO’s eastern flank, train with host-nation forces, and contribute to a wide range of contingencies.”

The 5,000 join roughly 80,000 U.S. troops already stationed in Europe or there on a rotational basis, according to the Pentagon.

In addition to the 2,000 troops deployed last week to Poland and Germany, about 1,000 troops were moved from Germany to Romania, another NATO country bordering Ukraine.

“Throughout their deployment, they will participate in a range of maritime activities in support of U.S. Naval Forces Europe and our NATO allies,” Abrahamson said. “One of the unique values of naval forces is their mobility and ability to deploy for a range of contingencies and operations.”

The deployment announcement came after National Security Adviser Jake Sullivan on Friday said Americans in Ukraine should leave the country within the next 48 hours as the risk of a Russia invasion of Ukraine has risen.

“The threat is now immediate enough that this is what prudence demands,” he said. “If you stay [in Ukraine], you are assuming risk with no guarantee that there will be any other opportunity to leave and there is no prospect of a U.S. military evacuation in the event of a Russian invasion.”

U.S. troops might help fleeing American citizens leaving Ukraine at the country’s border with Poland, but the U.S. will not send service members into the country for evacuation missions, Sullivan told reporters at the White House.

“[President Joe Biden] will not be putting the lives of our men and women in uniform at risk by sending them into a war zone to rescue people who could have left now but chose not to,” he said.

He said Russia could invade within the week, though he could not provide an approximate timeline for when it might occur.

“There is a very distinct possibility that Russia will choose to act militarily, and there is reason to believe that that could happen on a reasonably swift timeframe now. We can’t pinpoint the day, at this point, and we can’t pinpoint the hour,” Sullivan said.
National Security Adviser Jake Sullivan speaks during a White House briefing on Feb. 4, 2021. Sullivan said Feb. 11, 2022, that Americans in Ukraine should leave the country as soon as possible as a Russia invasion of Ukraine could launch in the coming days.

Civilians in Ukraine “will suffer immensely” if war breaks out on the “scale and scope that’s possible,” Army Gen. Mark Milley, chairman of the Joint Chiefs of Staff, has said.

“Given the type of [Russian] forces that are arrayed, the ground maneuver forces, the artillery, the ballistic missiles, the air forces — all of it packaged together, if that was unleashed on Ukraine … it would result in a significant amount of casualties,” the general said Jan 28.

Sullivan on Friday echoed Milley’s remarks that Americans who remain in Ukraine could be subject to Russian attacks.

“If a Russian attack on Ukraine proceeds, it is likely to begin with aerial bombing and missile attacks that could obviously kill civilians without regard to their nationality,” he said. “A subsequent ground invasion would involve the onslaught of a massive force with virtually no notice.”

Sullivan’s comments represent a heightened urgency regarding a possible invasion of Ukraine. For months, as Russia stacked more than 100,000 troops along Ukraine’s border, U.S. officials have not been willing to predict the next steps of Russian President Vladimir Putin.

“The reason I’m up here talking in the way I am to American citizens … is because we believe [Putin] very well may give the final go order — that is a very distinct possibility,” he said.

Secretary of State Antony Blinken issued similar warnings earlier Friday at a news briefing during his trip to Melbourne, Australia.

“We continue to see very troubling signs of Russian escalation, including new forces arriving at the Ukrainian border,” the secretary said. “And as we’ve said before, we’re in a window when an invasion could begin at any time.”

Should an invasion occur, Sullivan said leaving could become increasingly difficult, as “communications to arrange departure could be severed and commercial transit halted.”

“No one would be able to count on air or rail or road departures once military action got underway,” he said.

Meanwhile, Russia is engaged in a massive military exercise with neighboring Belarus. Though its leadership in recent weeks has said Russia has no plans to invade Ukraine, Sullivan said Russia continues to add troops and military equipment to the border each day.

Russia has said it wants NATO to deny Ukraine membership to the alliance and withdraw foreign troops and military equipment from Eastern European countries that joined NATO during the past 25 years, such as Romania and Bulgaria.

The U.S. has denied those appeals in individual and NATO responses to Russia but has offered some room for diplomatic negotiation. For example, the U.S. has offered to discuss arms control and nuclear weapons management agreements.

Top U.S. officials spent much of Friday on the phone with NATO countries. Biden held a video call with leaders from Canada, France, Germany, Italy, Poland, Romania and the United Kingdom, as well as the presidents of the European Commission, European Council and NATO Secretary General Jens Stoltenberg.

“The secretary made clear that the United States continues to see signs of Russian escalation, including new forces arriving at the Ukrainian border,” the Pentagon said in a statement. Austin also reiterated an invasion could begin at any time.

Blinken said the U.S. would “strongly prefer” to resolve tensions with Russia diplomatically, but Russia has not been willing to pull back its troops from the Ukrainian border.

“We’ve made every possible effort to engage Russia, to look at the concerns that it’s raised, to share concerns that we have, that European partners and allies have, to see if we can’t find ways to advance collective security on a reciprocal basis,” he said.

Whether Russia will invade or chose a diplomatic resolution remains to be seen, but the U.S. is “ready either way,” Sullivan said.

Post Views: 141
Previous Belarus to Send 200 Troops to Serve in Syria Alongside Russians
Next Options to improve Black Sea region’s security on the agenda for Austin, NATO counterparts